Cathedral of the Annunciation

From the Cachette (secret room) of the Palace of Facets there is a good view of the Cathedral of the Annunciation. 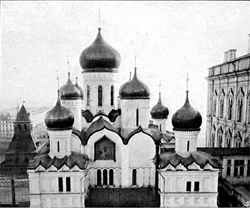 Before the foundation of the Cathedral of the Savior on High this Cathedral was the personal church of the Grand Dukes and Tsars of Moscow.  It was here that they held the baptisms, where they worshipped, took communion, married, and before the coronation there was an old custom that they threw money in front of them from the threshold of this Cathedral and in the church itself. 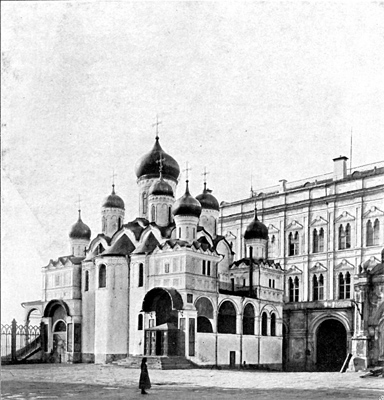 Since the 15th century up until our times, the Archimandrates of the Cathedral of the Annunciation have been the confessors of the Sovereigns.  They lived occasionally in the apartments which are found on the south side of the Cathedral, in order to always be present in the Palace.  The Tsars, most pious, began and ended their day by receiving the blessings of their confessor.

According to tradition, the Cathedral of the Annunciation was built in 1291 by the Prince of Vladimir, Andrey Alexandrovich, on the site of the village of Kutchkovo, which is also what was then called the site which came to be Moscow.

The stone church was built by Grand Duke Basil, son of Dmitri Donskoi, between 1397 and 1416.

In 1465 the celebrated icon painter Andrey Rubilov restored the paintings with the help of Theophane Gretchin and priest Prokhor.

Under Ivan III in 1482 the Cathedral collapsed from decay, was entirely demolished.  It was rebuilt by workers brought from Pskov.  They worked on it for six years and in 1489 Metropolitan Guerontii consecrated the new church.

Since that time the central portion of the Church has not changed.

In 1508 Grand Duke Vassili Ioannovich gave orders to the icon painter Feodor Edikiev and who with the priests and brothers restored the walls of the Cathedral with paintings done on a ground of gold.  He gave the rich oklads for the icons of the iconostasis and gilded the domes.  For this reason at that time this Cathedral was called the "Cathedral with golden domes" (Zlatoverkhii).

The fire of 1547 destroyed many of the icons, among others the "Deisis" painted by Andrei Rubiliov.

Ivan the Terrible restored the church, re-gilded the domes and placed golden crosses on top of them.

The church portico was decorated with paintings in imitation of those from the Iberian convent at Mount Athos. 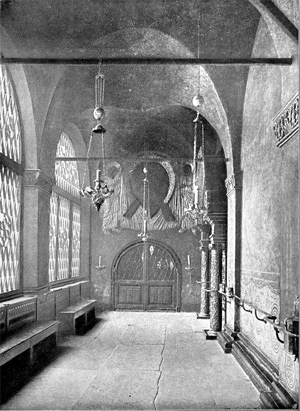 In 1564 they consecrated the altars in the domes.

It was again Ivan the Terrible who had a staircase with a portico on the south side, where he followed the religious services after he was forbidden to enter the church itself for having contracted his fourth marriage.  It was also there that he saw the comet which he considered to be the omen of his approaching demise.

This stair was joined to the palace and led to the lower garden of the river bank.

In 1612 the Cathedral of the Annunciation was looted and defiled.  Tsar Michael Feodorovich restored it.

Paul of Aleppo reported that in the time of Tsar Alexei Mikhailovich the portico of the church had a magnificent grillwork in yellow copper adorned with icons in silver.

In 1697 the mural paintings of the Annunciation were restored, but their original appearance was preserved.

In 1737 the Cathedral burned and was rebuilt.  Its mural paintings were restored yet again in 1770.

In 1800 the Cathdral was restored completely; the old floor was replaced with flagstone squares of agate colored jasper .

Under Emperor Nicholas I the interior and exterior of the Cathedral were, in the words of Sneguriov "decorated in a much more modern style, under the care of the churchwardens."

From 1863 to 1867 there was another complete restoration of the cathedral.  The domes were then richly gilded. This gilding was the work of the workshop of Goyenke and Pleske, previously of the Duke of Leuchtenberg.

The last restoration was done in 1884-85, under the direction of the the Archaeological Society of Moscow.

On the south side of the Cathedral of the Annunciation, one has found since 1836, an altar consecrated to St. Nicholas.  In the domes are four other altars which date to the 16th century.  They are  with the following invocations:
1. The Entry of the Savior into Jerusalem
2. The Archangel Gabriel
3. The Feast of the Holy Virgin
4. St. George the Martyr.  This last invocation had been changed under Alexander I, to that of St. Alexander Nevski.  In this iconostace are found the patron saints of the Romanov House. 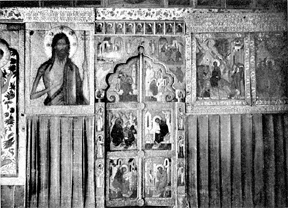 Iconostasis of the Entry of the Savior into Jerusalem, above. 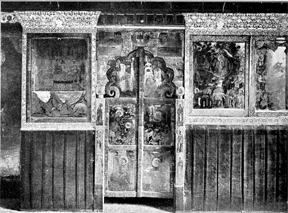 Iconostasis of the Archangel Gabriel, above. 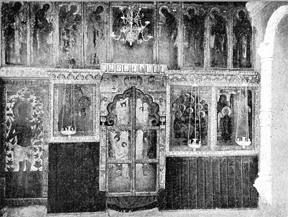 Iconostasis of the Feast of the Holy Virgin, above.

We note among the icons of the Cathedral:
1. An icon of the Novgorod school The Savior Miserichord, painted according to tradition in 1337 under Ivan Danilovich Kalita.
2. A miraculous icon of the Virgin of the Don, which Grand Duke Dmitri Donskoi had with him at the battle of Kulikovo.
3. The Miraculous Face of the Savior Miserichord, an icon after the one which they went to to seek healing during the plague of 1771.

The iconostaces of the churches which are located in the domes were brought from Novgorod by Ivan the Terrible.  They form by their antiquity and beauty a priceless treasure. 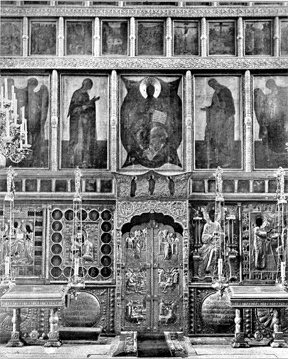 The Iconostasis of the Cathedral of the Assumption, above.

The mural paintings and vaults of the Cathedral of the Annunciation are most remarkable.  One sees there the patriarchs, prophets, the wise men of Greece holding the volumens (scrolls) on which are written their texts which correspond to the Christian teachings, and also the Apostles, martyrs, Russian Grand Dukes and episodes of the Holy Story.

Beautiful door frames of the Northern and Western doors of the church are decorated with a Renaissance design in blue and gold. 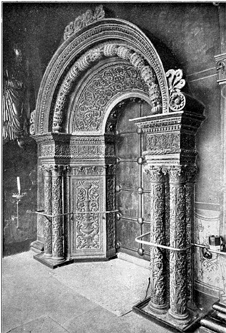 These doors are covered with copper plaques decorated with paintings in gold, were brought from Rostov, according to tradition, by Patriarch Philarette, former Metropolitan of Rostov.  These paintings depict the Annunciation, the symbolic Visions of the Prophets of the Old Testament which announced the incarnation of the Son of God, after the Sybils, holding scrolls on which are inscribed their prophecies and some of the Saints of Rostov.