Churches of the Nativity & Lazarus 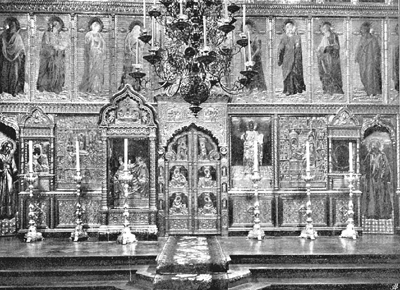 Interior of the Church of the Nativity of the Virgin

The Church of the Nativity of the Virgin was the personal church for the Grand Duchesses and Tsarinas.

In 1903, His Majesty Emperor Nicholas II had communion here as well as the Empress Alexandra Feodorvna and Their August Children.

The primitive construction we find beneath this church itself is on the site of an ancient small wooden church, consacrated to Lazarus, which had been annexed to the south side of the church of the Nativity of the Virgin.

In 1479, in the words of the annals "the roofing of the church of the Nativity of the Virgin and that of St. Lazarus suddenly collapsed during the night, with a terrible noise. Many icons were broken, as well as the sacred vessals of the Grand Ducal treasure," which, according to the ancient customs, were stored in a small room under the vaults of the church.

From 1681-1685, under the reign of Tsar Fyodor Alexeievich, there were great changes to the church of the Nativity. They removed the five domes which covered it and in their place and underneath of the partial new structure they built a cathedral to the invocation of the Decent of the Holy Spirit. This cathedral only existed for four years. After its demolition a church with just one dome replaced it, which was again dedicated to the Nativity of the Virgin. It was probably at this time that the church of St. Lazarus was walled up. Long forgotten since then, it was not rediscovered until the construction of the Great Palace, when they broke through a wall to build a staircase to give onto the Terems. Restored in its ancient style, it was newly dedicated to St. Lazarus. During this work, they found remains under the altar and near the northern wall, which confirm the evidence in the chronicles that, formerly, there was a cemetary near the church.

Among other icons in the Church of the Nativity of the Virgin, one will particularly note:

1. Copy of the Miraculous Icon of the Holy Virgin Fyodorovskaia, brought from Kostroma to Moscow by the mother of Tsar Mikhail Fyodorovich. March 14, 1613, in Kostroma, the young Boyar Mikhail Fyodorovich Romanov was proclaimed Tsar in front of this icon at the Ipatievskii Convent. The original icon may be found in the Cathedral of the Assumption in Kostroma.

2. Copy of the Icon of the Virgin of Vladimir (in a gilt silver kiot to the left of the sanctuary door.

3. Copy of the Icon of the Savior-Painted Without Hands covered in gold and adorned with 2550 diamonds. The gift of Matrona Pavlovna Saltykov, 18th century.

Below, interior of the Church of St. Lazarus 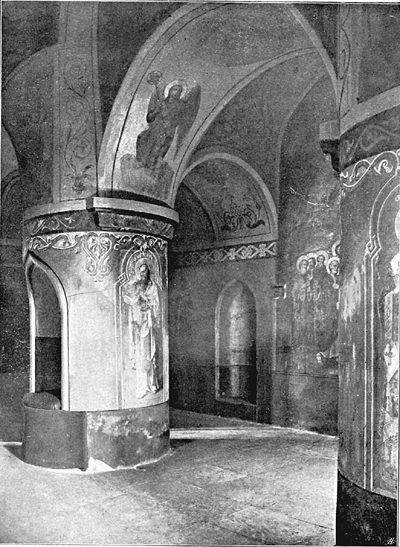 The Best Antique Roses for Your Austin Garden

This is Bob Atchison's guide to picking the best antique and old roses that do well in Austin.  There are plenty of rose-stories from Bob's past