With its gilded frames surrounding the doors and windows, decorated with ornamentation in the Gothic style, such as those seen in the fontisepieces of ancient Russian manuscripts of the 13th and 14th Centuries, the Holy Vestibule is, along with the Palace of Facets, part of the remains of the Palace of Ivan III. This Palace was composed, as was said earlier, of different structures, connected by exterior passages, each structure with its own vestibule. 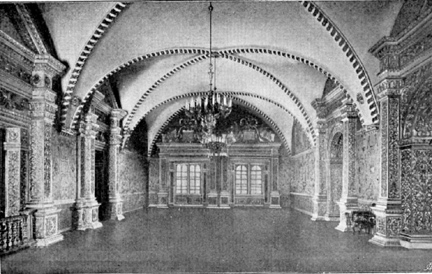 The name of the Holy Vestibule comes from the paintings covering the walls, showing these subjects:

1. Apparition of the Cross to the Most Orthodox Emperor Constantine, with these words "By this sign, you shall conquer"

3. Apparition of an angel to Joshua before the walls of Jericho

4. Visit of the Holy Trinity to Abraham

These painted murals, from whose composition were reproduced the first images done from the time of Fyodor Ioannovich, and were the work of the academician painter Zavialov, who died in 1850.

Above the door opening onto the Red Staircase is an inscription telling us that "the foundations of the Holy Vestibule and the Palace of Facets were laid by the Orthodox Grand Duke Ivan Vallilievich III in 1487."

Next to this, above the window, one finds another inscription "Renovated during the reign of the Orthodox Emperor Nicholas I in 1847."

Below, Door to the Holy Vestible opening to the Red Staircase. 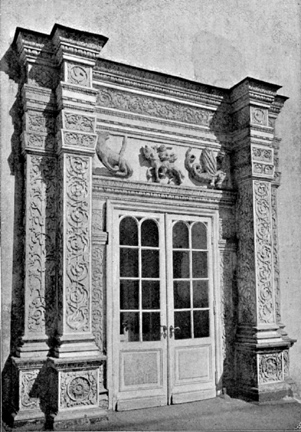