At one time the Terems made up a part of the normal residences of the Grand Dukes.  It formed the upper floor of the residence and served as the private apartments of the Sovereigns. 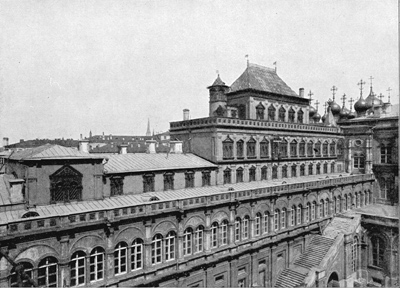 South Facade of the Terems Palace.

Despite numerous modifications to which is has been subjected, the Terems Palace has, to a great extent, retained its ancient appearance.

The principle portion of the the Great Palace hides one side but it nevertheless keeps its dominant presence, as it has in the past,   among the buildings which surround it.   From a distance one sees the capricious forms taking shape of its pavilions and towers.

Two rows of sculpted cornices form a soft transition between the balustrade, the mottled roof and the diversely ornamented windows.  Among the windows one notices those of the chamber of the third floor by which one finds the throne. 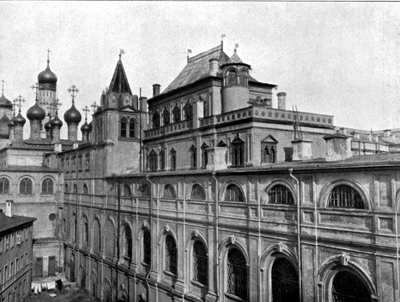 North Facade of the Terems Palace

Ground Floor:
These rooms on this level, called the Alevisio rooms, actually serve s the rooms for the furnaces and trash.

First Floor:
This is made up of vaulted rooms (built in the second half of the 16th century) fitted out to serve as lodgings for those persons of the Imperial suite during the Court's stay in Moscow.

Second Floor:
(One enters the rooms of this floor from the stair landing of the Savior-on-High and by the "Cast Iron Corridor" which connects, all on the north side, all of the rooms.)

This floor is the "under cage" of the Terems properly called, the floor of the private apartments of the Tsar, built, as one can see, par by Tsar Mikhail Fyodorovich.

The rooms of this floor, with their original vaults, quite low, and the very deep window casings, are occupied by the persons in the Imperial Suite during the Court's stay in Moscow. 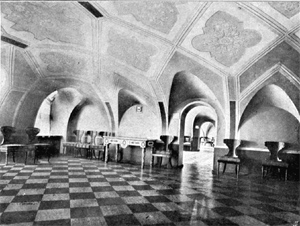 In the first room, a trap door reveals a small stair which leads to a hidden room, practically between the vault of the first floor and the floorboards of the second.  Similar hidden rooms are often found in the ancient Russian dwellings.

Third Floor:
One has access to the Front stone court (that is to say the Terrace of Savior-on-High) by an old stairway where the two stairs were covered by square roofs which is decorated at the exit with two lions sculpted in stone which are holding shields with the cypher of Emperor Nicholas I.   In the tympanum above the parallel two arches at the base of the stairway, there is represented on the exterior The Assumption and the Holy Trinity.  In the 17th century, as was already said, this stairway was called the The First Golden Perron (nb: perron = external staircase enlarged with a platform).  Its sculpted steps display a remarkable architectural ornamentation of the 17th century. 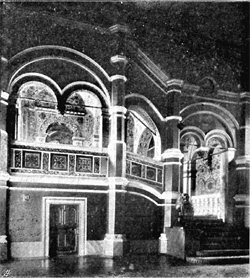 The third floor of the Terems which, in the 17th century, served as the Tsar's residence, is a precious monument of ancient Russian architecture.

The rooms of this floor have cradle vaults with pointed spaces above the windows, and they have as support points sculpted consoles displaying the double headed eagle.

The doors are coffered with flat topped arches, with diverse ancient ornamentation, sculpted into the stone.  The window casings are decorated with sculpted designs, imitating wood sculpture.  Window supports in wood, with ancient sculpted designs.

Most remarkable are the pottery tiled stoves, which still retain much of the ancient tiles.

The First Chamber, Refectory, previously called "The First Vestibule of the Passage" and at the end of the 17th century "The Antechamber" 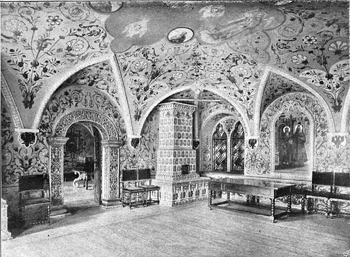 The vaults are painted with images of the Savior, Evangalists, Archangels Michael and Gabriel, and on the walls are the images of the Most Holy True Believer Emperor Constantine, his mother Helena and the images of Grand Duke Vladimir and St. Olga.

An ancient cupboard of Russian workmanship.

The Second Chamber, Assembly Hall, or Salon, formerly called the "First Chamber" and at the end of the 17th century, called the Oratory (Krestovaya). 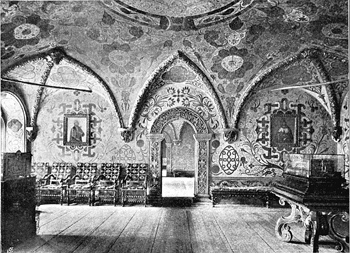 On the vault is the image of the Holy Virgin, standing on a crescent moon and holding the Baby Jesus.  On the walls, St. Boris and St. Gleb, Saint Nicholas the Miracle Worker, St. Alexander Nevsky and St. Alexandra.  The design of the ornamentation which frames these paintings is of the ancient Russian style.

The seats, which are very old, are upholstered in Venetian velvet.

In a casket box, resting on a console next to the window, is the original Act of the Election of Mikhail Fyodorovich Romanov to the Throne.  Another casket box contains the original diploma of the institution of the Patriarch in Russia.

The Third Chamber (The Throne Room), formerly called simply "the Chamber", which corresponds to our term today of "Study" In the time of Tsar Mikhail Fyorodorvich it was called the Gold Room. 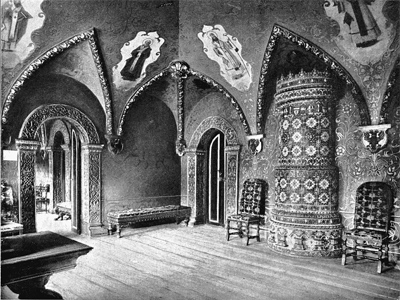 In the middle of the vault is a painting showing the Savior Enthroned, around him are St. Basil the Great, St. Gregory of Nazianzus, St. John Chrysostem and the Metropolitans of Moscow, St. Peter, St. Alexei, St. Jonas and St. Philip.

On the pillars, and the window arches and vaults are the armorials of the provinces of the Russian Empire.

In the "red" (krasny)  corner, or the beautiful corner is the Tsar's armchair, covered in velvet.

Next to the opposite wall, an ancient cupboard of Russian workmanship.

In sculpted casket box, resting on a table next to the middle window is kept the "Book of the Election of Mikhail Fyodorovich".  This book is ornamented with illuminations and drawings which recall somewhat the modern coronation albums; it gives the details of the Coronation of the Tsar and contains images of the events.

The Fourth Chamber, is the the bedroom (opotchivalnya)  On the walls are four medallions:

1. The Nativity of Christ;

2. The Nativity of St. John the Precurser;

3. The proscribing of his name;

4. St. Nicholas the Miracle Worker as a child. 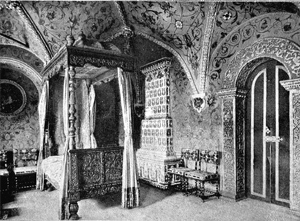 The sculpted bed is from the end of the 17th century, with the bed cover and curtains in Chinese silk.  On an ancient bed pillow is embroidered the words of the 40th Psalm of David "Oh most powerful, gird your sword and triumph".

The Oratory, rather small, has a double window.  Mural paintings represent the Saints.

On the wall are two wall cupboards with glass paned doors, which hold very old icons, crosses and panagias. 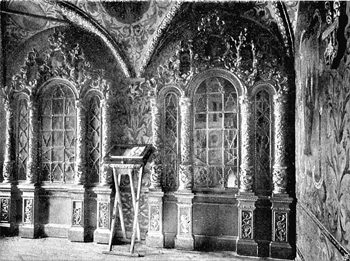 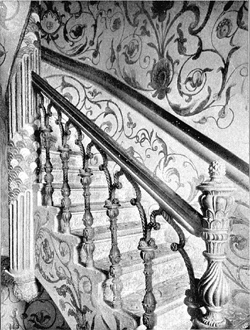 Between the two cupboards, resting on a lecturn, and under glass is a hand written Gospel from the 14th century (Apraxos).

On the first page of the Gospel is a "grotesque" form heading which is the same as which we have seen often during the visit to the Palace.

The metal rings which we see on the vaults serve to hold the chadeliers.

There are adjoined to the Chamber a small vestibule and a little room "where the men in service would gather with the plates destined for the Tsar's table"; in other words, this was the Tsar's buffet.

The armoire and the chairs of this little room are of ancient Russian manufacture.

The interior window frames of these rooms still contain their original panes of mica.

In the vestibule a lateral door opens onto small circular staircase, which is very narrow, which joins this floor with the floors above and below.

It terminates up in a small Belvedere or "Pleasure Tower". 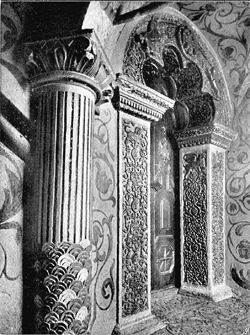 This ancient stair is very pretty with its stone steps and supports cut directly into the wall.

At one turn, there is a beautiful view of the door of the little Terem.

This door with its four lobed archivolte is completely covered with sculpted ornaments and paintings of monsters, unicorns and winged lions.

The tympanum of the archivolte has a double headed eagle sculpted into the stone. 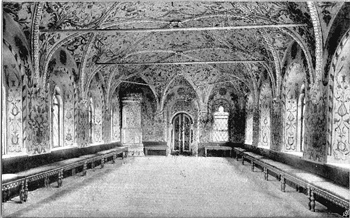 Fourth Floor:  On the fourth floor, there is only one large room.

It was built by Tsar Mikhail Fyodorovich for his sons Alexei and Ivan, which is confirmed by and inscription above the East door: "By the grace of God and by the order of the Sovereign Tsar and Great Prince Mikhail Fyodorovich, autocrat of All Russia and possessor of many sovereignties, these apartments have been built for his children and the Tsarevich Prince Ivan Mikhailovich in the Year of the Creation of the World 7144."

In the 17th century, this room was called the Stone Attic or the Little Terem with gilded roof (Teryemok).

The window cornices of the Teryemok are adorned with animals, birds and monsters, all sculpted into the stone.

Two magnificent tiled stoves, most of the tiles are ancient, embellish the room. 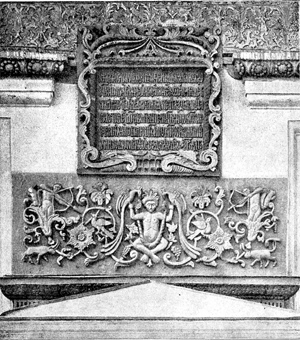 We note, on the exterior, the sculpted window frames, whose hanging keystones show doves and double headed lions.

Below, the stairway leading to the Upper Stone Courtyard on the third floor. 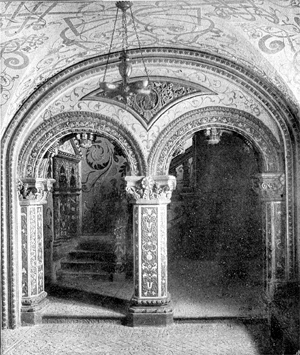