It is as necessary that the master of the house should understand how to carve well as it is for a young girl to dance in order to secure a husband. La Reyniere. 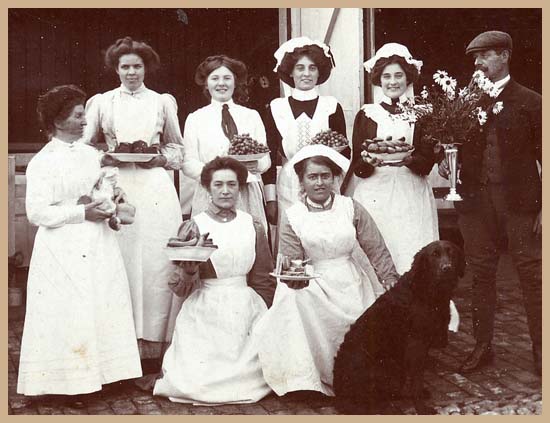 The fact that meat, poultry, game, fish, etc., are not now so universally carved on the dining-table as formerly argues nothing against the necessity of a knowledge of this subject. Rather, on the contrary, is it the best of reasons in favor of the acquisition of skill in the practice of this art by all women who take up the calling of a waitress. 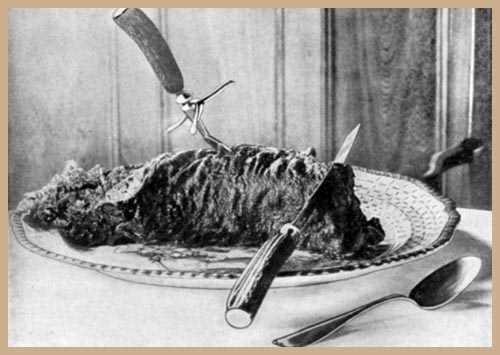 Above: Carving Loin of Lamb or Veal

To be appetizing, meat needs to be cut in thin, even slices. A thick, ragged-looking section of underdone beef, set before one who chooses well-cooked viands in small portions, will take away all pleasure from a meal. If we had not seen joints otherwise served, we should think it needless to say that meat should be carved across the grain rather than with it.

Above: Sirloin Steak outlined for Carving

The first essential to successful carving is a thin, sharp knife, and the second is a knowledge of the location of bones and joints and the texture of the flesh in relation to its location. Knives of good steel can be made sharp, and with care kept so. One can learn the anatomy of the several joints only by handling meat before and after cooking. Finally, one can become expert in carving only by carving.

Let a rib roast rest on the platter on the ends of the rib bones and the piece of backbone attached to them (sometimes the piece of backbone is removed before cooking). This gives browned fat above, below this a ridge of not very tender meat, and beneath this a centre of tender meat resting directly on the ribs below. The roast is to be carved, to give each individual a portion of the browned fat, tender, and less tender meat. Press the fork down into the centre of the meat, to hold it firm, then run the knife between the meat and the rib bones at the thin or flank end, marked I and 2 on the illustration. Then, beginning at 3, draw the knife down the whole width of the meat to the rib bones at 4, taking care to keep as close as possible to the backbone; then, if the whole roast is to be carved, turn the knife and draw it the full width of the roast close to the ribs and along to 1-2, where the work was begun. The whole roast is now free from the bones. Without removing the fork, place the point of the knife in at 3, and cut the meat in thin slices (see dotted lines on illustration), cutting down and through the outer browned fat, the ridge of less tender, and the eye of tender meat. Serve a spoonful of meat juice ("platter gravy ") on each service of meat. If but a portion of the roast is to be served (as in small families, where the roast is served for two dinners), do not free the whole roast from the bones. Remove the knife at 4, or after the piece of backbone has been separated from the meat. Then cut, as above, as many slices as are needed; turn the knife, and, beginning at i, run the point under the slices the whole length of the rib bone, and they are ready to serve. As shown in the illustration, the heavy end of the meat is at the left of the carver. This position answers well when but a portion of the roast is to be cut. When the whole roast is to be carved, it is preferable to reverse the illustration, having the heavy end of the roast at the right.

A rolled rib roast is the same as the above, except that before cooking the bones are removed, and the meat is rolled and tied in a compact shape. When the joint is sent to the table for carving, the strings are removed, and a fancy skewer inserted to hold the meat in shape. The rolled rib roast is carved so as to present, in each service, the browned fat, tender, and less tender meat, as in the standing roast. The rolled roast rests on the platter on its end, the layer of browned fat encircling it. Put the fork down into the meat through the small open space below the eye of tender meat, and do not remove the same until several slices have been cut. Draw the knife from the back of the meat, from i to 2 and 3 towards you, cutting off thin slices from the whole surface. Of course the upper slice will not be served except to one who desires well-cooked meat. Add a little platter gravy to each service.

Beginning at the thick end, cut the fillet in thick slices. Cut transversely or directly across, as is preferred. Put a spoonful of mushroom or other sauce above each slice on the plate.

The broad end of the steak is at the right of the carver. Beginning at the upper right-hand corner, cut out the bone. Cut as close as possible, turning the knife, when the end of the bone is reached, to come back on the lower side. Remove the bone to one side of the dish. The sirloin proper (i) is now above and the tenderloin (2) below the space from which the bone was taken. Cut these two portions of the steak into narrow slices, and serve a piece of each on the several plates. The sirloin should be cut from the outer edge of fat towards the edge from which the bone was taken, and the tenderloin from the edge which bordered on the bone towards you. As the flank end of a steak is rarely edible, it should be removed before cooking.

Cut round steak in narrow strips across the grain of the meat, from the outer edge of fat to the opposite side.

LOIN OF VEAL, LAMB, OR MUTTON

Before cooking, have the backbone of the loin cut apart at each rib. Set the joint on the serving dish, to rest on the cleft backbone and with the well-browned skin uppermost. Beginning each time at the top, cut the roast in slices, separating them at the incisions, made before cooking, between the ribs. Serve a rib as a portion.

CROWN OF LAMB OR PORK

When a crown of lamb or pork is made ready for cooking, the ribs of which it is made up must of necessity be cut apart at the backbone. This renders it a dish most easily carved and is one reason for the favor that is accorded it. To serve, simply finish cutting the ribs apart. A rib is a portion. Serve with it some of the vegetable with which the crown is filled.

LEG OF LAMB, MUTTON, OR VENISON

Let the leg rest on the platter with the outer or convex side upward and the small round bone to the left of the carver. Press the carving fork down into the meat at the first joint (the knuckle) above the end of the round bone on the left. Beginning at the top of the central portion of the roast, cut in slices down to the bone until the large bone at the right is reached, then turn the knife and run it along the bone, to loosen the slices.

Insert the fork near the centre of the backbone. First remove the head, then the ham and shoulder on one side, then the ham and shoulder on the other side. In each case make a circular cut around the joint. (See lines around the leg and wing joints of the turkey on Plate 42.) Cut thin slices of meat parallel to the backbone, down to the bones, then turn the knife to free the slices from below. Cut, if necessary, to remove dressing, Then remove the fork and carve the hams and shoulders in the same manner as indicated for a leg and shoulder of lamb. In serving, supply each plate with lean and fat meat, also stuffing and apple sauce.

ROAST OR BOILED TURKEY OR CHICKEN

Set the turkey or chicken on the platter with the drumsticks to the right of the carver. Insert the carving fork firmly at the highest point of the breastbone (i). First cut off the leg and second joint on the side farthest from you, making a circular cut around the joint; cut off the1 wing on the same side and in the same way; then remove the leg and second joint (2 to 3) and the wing (4 to 5) on the other side in the same way. Then, without removing the fork, cut thin slices lengthwise the breast, first upon one side and then upon the other. Remove the fork, and separate the second joints from the drumsticks, cutting through at the joint. Serve light and dark meat, with a little dressing, on each plate.

A galantine is most easily carved, and, being solid meat, goes farther than any other meat dish. Carve in thin slices from the right to the left. 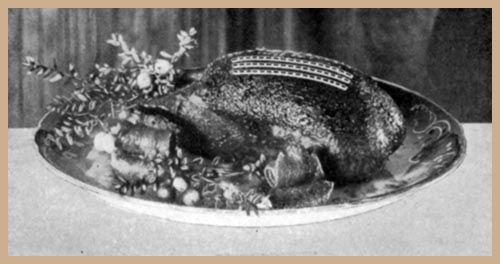 At a "men's dinner" a whole duck is served each guest. When presented as a game course at a formal dinner, the breast only is served, and this is cut in lengthwise slices, as roast chicken or turkey. Orange sauce is served on the plate, and celery or some other salad on cold plates.

Cut the crust directly through the centre in two directions, then cut each quarter section once or twice from centre to circumference, as in case of other pies. A triangle of crust is taken out onto a plate, then a piece of the filling, and a spoonful of gravy is poured over it.

The filling of a vol-au-vent is usually quite firm, and it may be sliced from right to left as a galantine. Cut each slice through cover and case. Serve with spoon and fork. A round vol-au-vent might be carved as a pie. 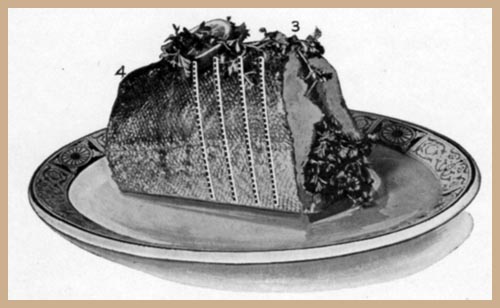 Above: Middle portion of Fish Outlined for Carving

A silver knife and fork are indispensable in carving fish, as the use of steel implements occasions a disagreeable flavor. The cooking of large fish whole is not so common as formerly, but the method of carving is the same for a whole fish or the central portion of a fish. From a whole fish the head is first removed, then the knife is run through the flesh along the backbone (3 to 4), cutting as close to it as possible. Now cut the half turned towards you, or the upper half, if the fish rests on its side] into thick sliceSj thus serving all the fish on one side. Then turn the dish around, or lift the bone, according as the fish is disposed on the platter, and serve the flesh from the other side.