Boil one-third cp of pearl barley, previously soaked overnight in water, in one quart of milk, putting it over the fire in the cold milk.Tie in a piece of thin cheesecloth two inches of stick cinnamon, and six cloves, bruise these with a mallet or hammer, and cook in the milk until the desired flavor has been brought out.Add one-fourth teaspoonful each of salt and grated nutmeg, and one-fourth cupful of green tea. Infuse slowly for ten minutes, not allowing the mixture to boil, then pour over two well-beaten eggs while beating the whole with a Dover beater, and serve at once. 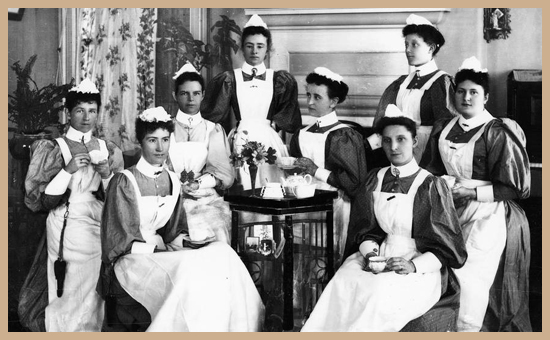 Above: Group of Maids having Tea

In a porcelain saucepan cook one pint of water mixed with one pint of cream, together with two heaping tablespoonfuls of green tea and a few bits of stick cinnamon. Remove from fire just before boiling point is reached, and strain over three stiffly beaten eggs in a bowl, beating constantly.Return to fire and stir until hot; serve in glasses with a garnish of whipped cream flavored with fruit juice.

Make a syrup of one and one-half cups of sugar and one cup of water. As soon as the sugar is dissolved add to the saucepan a cheesecloth bag containing a tablespoonful of cloves and a stick of cinnamon, the cloves bruised the cinnamon crushed, also a blade or two of mace, and six allspice berries. Allow the spices to boil in the syrup until the flavor is developed, then remove, and continue to boil the syrup until a temperature of 215 F is reached, or until it begins to form a small, easily broken hair. Pour the syrup into a fancy bowl, preferably of colored glass, put into it a small, deep-bowled spoon, and serve instead of sugar to sweeten the tea. Lemon juice may be added to the syrup, or thin slices of lemon may be passed.

For each serving beat the yolk of one egg with one tablespoonful of fine granulated sugar.When mixed add one-fourth cupful of thin cream. Have ready one cupful of hot, strong tea, pour this over the mixture of egg, etc. , beating the whole while doing so. Serve in a bowl of delicate china, and pile over the top the beaten white of the egg, made into a meringue with two tablespoonfuls of sugar, two teaspoonfuls of lemon juice and a little of the granted yellow rind. If desired, the meringue may be very slightly browned by holding the bowl under a gas flame.

Make a syrup by boiling together for ten minutes two cups of sugar and one cup of water. Add one cupful of very strong Indian Tea, made by infusing one-third cupful of tea in one cupful of boiling water, and pressing the leaves free from moisture. Add one cupful each of lemon and orange juice, two cupfuls of strawberry syrup, one can of grated pineapple, and let the whole stand for half an hour. Strain, pour into punch bowl, and add enough iced water to make from four to six quarts of punch. Garnish with a cupful of maraschino cherries.

Chocolate, like cofee, is improved by the addition of a little salt, in the proportion of one-fourth teaspoonful, or a trifle more, to each quart of the beverage. Chocolate may be made with half milk, half water; half cream, half water; or with whole milk or whole thin cream.

For two good servings mix one square of chocolate, shaved or grated, with one-half cupful of sugar, and stir into one cupful of water. Cook for five minutes after the mixture boils, and chill quickly. Mix equal parts of juice from fresh, crushed strawberries, pineapple, and oranges, until there is a cupful of the mixture, add to the chocolate, put into a milkshaker and shake hard and long, then serve in tall glasses one-third filled with fine-shaved ice with two straws in each glass.

Shave two squares of chocolate, and cook with one-half cupful of sugar and one-half cupful of water until the spoon makes a track in the mixture, which should be kept constantly stirred. Add one-half teaspoonful of salt and one pint of rich milk. Let the whole boil for one minute; have ready two stiffly beaten eggs, turn these quickly into the saucepan, beating at the same time with a Dover beater, and continue to beat over a gentle heat until there is a fine froth. Serve at once in chocolate cups with lady fingers. The mixture should be very thick, but smooth in consistency.