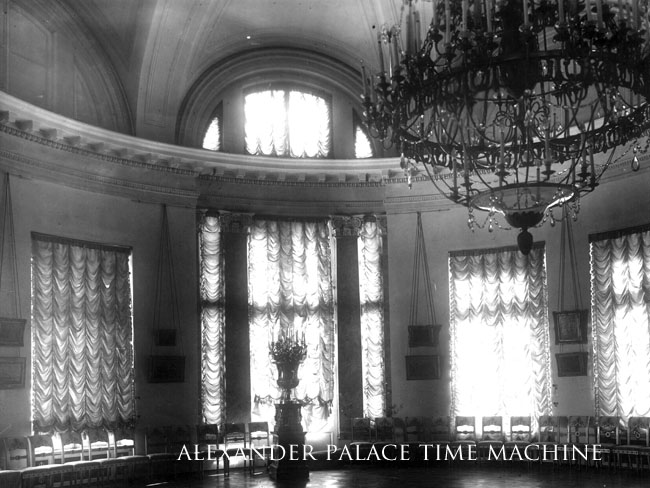 The Semi-Circular Hall is one of the most famous rooms of the Alexander Palace and is the center of the formal ensemble of parade halls. It remains essentially as Quarenghi designed it, with the only major change being the replacement of a pair of Russian stoves on either side of the entrance with marble fireplaces, during the reign of Nicholas I. The walls are covered, in the Russian style, with smooth, white artificial marble. The central doors of the apse open out onto a terrace overlooking the Alexander Gardens. It was through these doors that the Imperial Family left the palace for the last time on August 1, 1917. 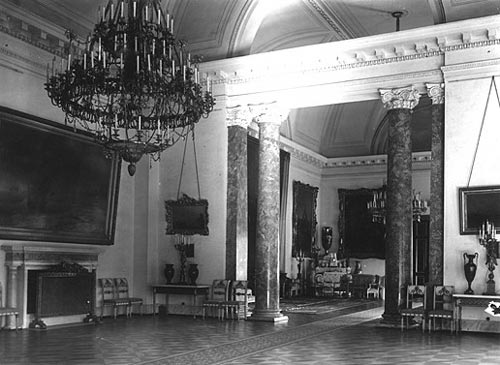 The spaciousness of the Semi-circular Hall, which opens through broad, columned arches into the Portrait and Billiard Halls, is one of the most ambitious spaces in any Russian palace. The three rooms resemble the central hall of a Roman bath which may have been Quarenghi's intent. No other Imperial Russia palace has quite the same restrained, airy, yet opulent mood in its public spaces. It may reflect Catherine the Great's intention to mirror her ideal vision of what her grandson Alexander I could and should become as Tsar - a masculine, enlightened, and cultured ruler - much like herself. 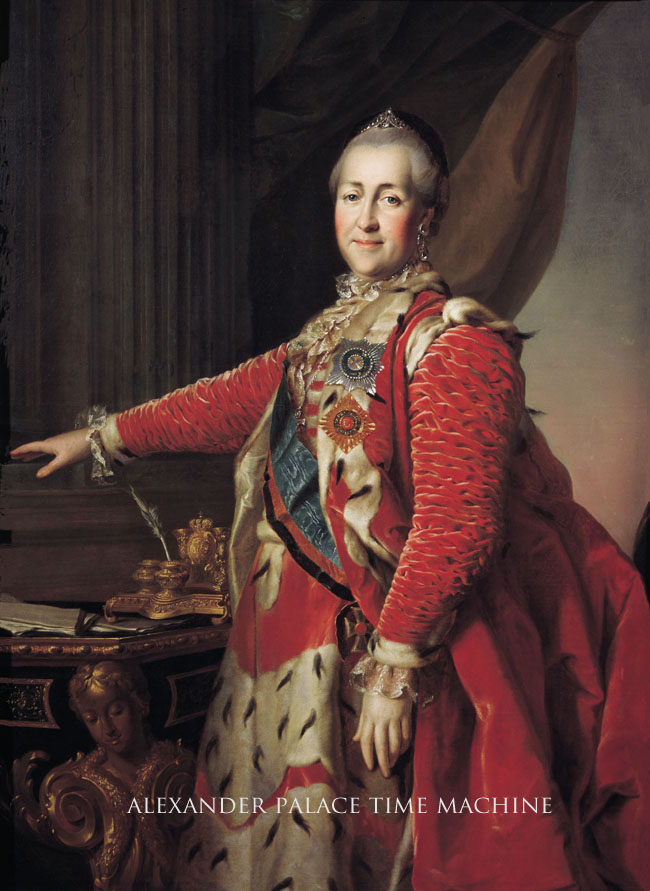 Above: Catherine the Great, she presented the Alexander Palace to her grandson, Alexander I in June 1796 as a wedding present.  Originally it was called the "New Palace".

The furniture was sparse in comparison with the size of the hall. This room was used for gala dinners, balls, receptions and special events. Since the Alexander Palace was intended to be a summer palace, the doors to the park and front of the palace were designed to be open - revealing a vista from the facade colonnade all the way down the formal expanse of the Alexander Park.

The Semi-circular Hall was used for most of the largest gala dinners at the Palace in the Imperial years. Such dinners were the mainstay of the social life of St. Petersburg. Invitations were simple but sumptuous, printed on heavy paper with the Imperial cypher, and would be hand delivered by special liveried messenger to each of the several hundred guests. An Imperial dinner during the reign of Nicholas II was an amazing event by today's standards. Guests would be lead first into the Portrait Hall, for the traditional Zakuska course, a lavish cold hors d'ouevres buffet. There would be dozens and dozens of dishes, cold meats- veal, beef, pork, cold fish- sturgeon, salmon, trout, caviar in lavish amounts, salads, cheeses, breads, and of course vodka and French Champagne. If a guest had been to dinner before, they would wisely eat as much as they politely could. Doors would be opened and dinner announced by liveried servants. The main dinner in the Semi-circular Hall would see the room set for four or five hundred people with tables of ten or twenty guests in the center of the room, with service stations along the wall, one for each table. 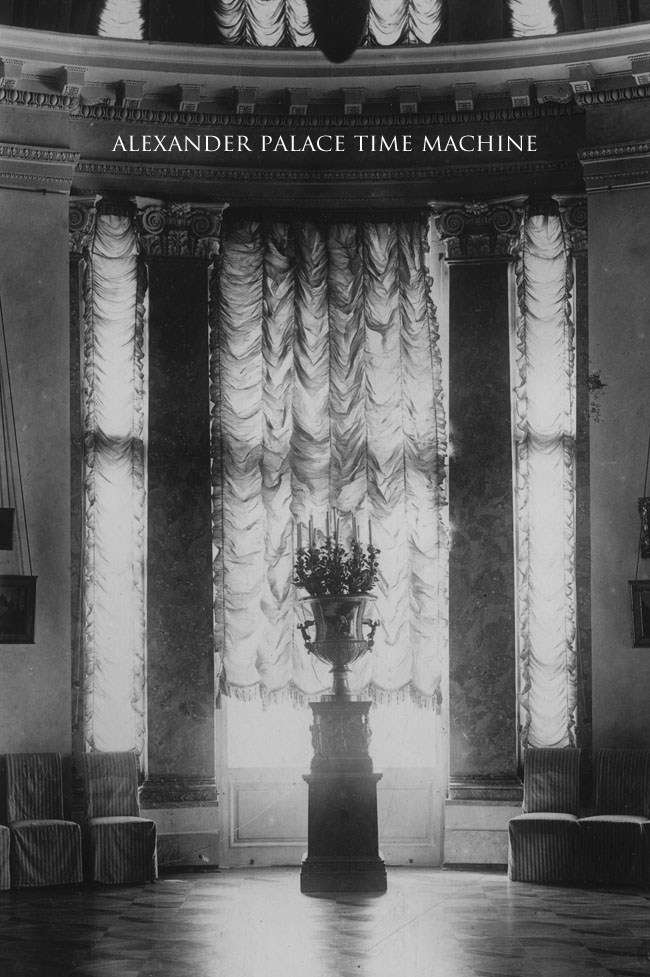 Above: View through the doors onto the garden terrace of the Alexander Palace in Tsarskoe Selo.  The Imperial fmily exited through these doors on their last morning in the palace before their Siberian exile in 1917.

Place settings would include all of the glassware needed for the meal, flawlessly made by the Imperial Glass Manufacture and etched and enamalled with the Imperial Monogram and Romanov Eagle. The silver was solid sterling, and each table would be set with huge solid silver candelabras, with the candles covered by silk shades. Huge and valuable silver ornaments would adorn each table. Dozens of porcelain plates for each course, hand painted in the Imperial Porcelain Factory, stacked on each of the service stations. A simple but elegant menu with the Imperial cypher engraved on heavy paper and the menu handwritten in an elegant script at each place. There needed to be two servants for each guest because Russian Court Etiquette demanded that dinner last only 45 minutes, perhaps an hour, but NEVER longer. This must be considered in light of the fact that dinner was in the highest elegant French manner of the day; that is to say seven courses: fish, soup, fowl, salad, entree, roast, dessert, sweets. 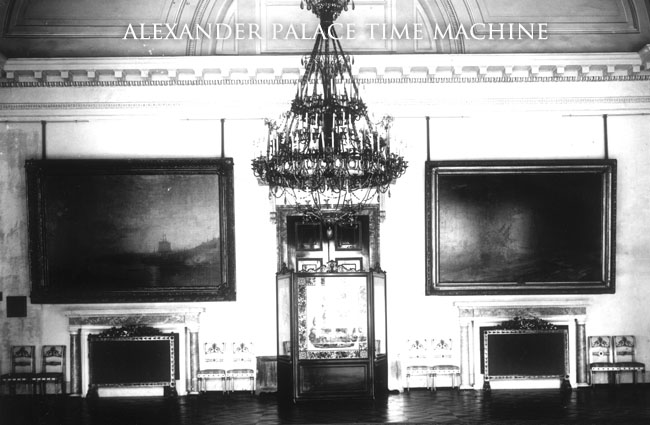 Above: Entrance door to the Semi-circular Hall.  This picture was taken when the palace was a museum after the revolution and a display case blocks it.  The fireplaces on both sides of the door were originally traditional tall Russian stoves.  They were replaced by these marble ones by Nicholas I.

Flatware for each course was set as each course was served. "Russian" service was invented at this time, although today it is the service of any fine meal... each plate created in the kitchen and served complete to the diner. Prior to this period, huge platters were brought to the diners, who helped themselves. No one could have ever managed a mouthful of a seven course meal in only 45 minutes that way. There were also unwritten rules to dinner. Woe to the unwary diner who set down their knife and fork on the plate, perhaps to sip some wine...that was the signal to the attending servants to remove the plate, never to return. Each course would also have to be rigidly timed, so a slow eater would see a barely touched plate whisked out from under them. Imagine the sheer logisitics of serving, feeding and clearing a seven course meal for 400 people in under an hour! The food, however was of the finest ingredients, and prepared by some of Europes best chefs in the heavily sauced "l'Escoffier" style of the day. Wines were also the finest as Nicholas II was widely known to have the finest and largest wine cellars in Europe. The cellar master's surviving notes indicate that the Tsar himself was always to be served Heidsieck Monopole French Champagne, not Roederer Cristal as popular myth suggests. Finest vintages of the best Bordeaux would also be served, Margaux, Lafite, Leoville. Dessert would be accompanied by fine sweet Riesling wines from Alexandra's family estates in Darmstadt or the first growth Tokays of impeccable vintage or in later year, perhaps by wines from the Tsar's private vineyards at Massandra in the Crimea. Ancient madiera was also popular, especially with Nicholas who is said to always have had a glass nearby.

During the last years of the Romanov Dynasty the Semi-circular Hall was also regularly used to show silent movies and slide shows. A square hole was punched through the wall on the right hand side of the doorway and a Pathe film projector installed. A portable screen was constructed. Movies were usually shown on Saturdays, when the Imperial family would sit in front, while the servants stood behind them to watch the show. While most films were educational - on nature subjects, travel or WWI - comedies and thrillers were also shown. One of the most interesting programs was one which included a film on the life of Madame DuBarry during the French Revolution. The climax of the film was a chilling scene of Madame DuBarry's execution on the guillotine, which the entire Imperial family watched without visible reaction. This scene took place just a few months before the Russian Revolution and was long remembered by people who saw it. After the exile of the family to Siberia the projector and a number of films were sent to entertain them in Tolbolsk.

The massive gilt bronze and porcelain vase on the left is about seven feet tall and stood in the center of the Semi-circular Hall. In 1896 it was wired for electricity. The chair on the right is one from a large, special suite of chairs carved for the Semi-Circular Hall in 1796.