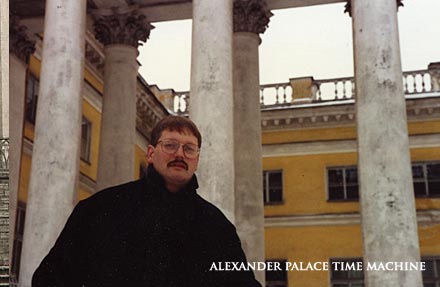 The Alexander Palace Time Machine began in 1996 when the first version went live on the web. It was the creation of Bob Atchison, whose life has been dedicated to the Alexander Palace and its restoration. His passion for the palace began when he was a boy of eight in Seattle, Washington, when he first read about the palace and the fate of the last Tsar and his family.

In the late 1970's Bob made his first of many trip to the palace over the years. In the early 1990's he was instrumental in the designation of the palace as an endangered monument by the World Monuments Fund and was chief historian on the WMF's first expedition to the palace. Bob has appeared on PBS, the Discovery Channel and A&E Television on issues related to the Romanovs and the palace.

Bob's story was told in Reader's Digest "The Boy Who Dreamed of a Palace" which is linked at left.

Just a few links to newspaper articles about Bob and his work for the palace:

Radio Free Europe interviewed Bob about his work with the World Monuments Fund to save the palace and open it as a museum, Russia: Tsar's Palace Receives New Lease On Life By Lindsay Percival-Straunik- 12 May 1997

Since the creation of the Alexander Palace Time Machine the site has grown to become the largest and most popular website for Romanov and Russian history. Over 1 million people visit the website and its popular forum every month. Yahoo named it site of the year in 1999 and it contues to receive accolades from all over the world. Through the volunteer efforts of palace enthusiasts from around the world many of the pages in the site are now available in other languages. Many famous historians have contributed pages to the site.

When the site was created most of the photographic images came from the collection of Anatoli Kuchumov, former curator of the Alexander Palace before World War II, who was Bob's mentor. Since the sites creation Bob's Photo archive has grown to over 2,000 images of the palace, St. Petersburg area and Romanov family.

Bob's knowledge and expertise led him to be asked to appear on television and consult with television producers: appearing on "Secrets of the Romanovs" 1997 A&E "Histories Mysteries"; and advising to "Biography" Anastasia: Her True Story (1997),

Bob has also consulted, assited and advised authors and scholars of Russian History.   Just a few books where Bob has been thanked for his contributions:

Twilight of Splendor: The Court of Queen Victoria During Her Diamond Jubilee Year
By Greg King, Published by John Wiley and Sons, 2007

The Fate of the Romanovs
By Greg King, Penny Wilson Published by John Wiley & Sons, 2003

The Romanovs: The Final Chapter
By Robert K. Massie Published by Ballantine Books, 1996

The Alexander Palace Time Machine has been linked to by BBC News, ABC News, and New World Encyclopedia among many others.