During the first weeks following their arrival and move into Livadia, the Imperial Family was absorbed by the preparations for a charity bazaar to benefit the poor of the city of Yalta and its suburbs.

The Empress often went to the aid of the poor and the sick, however she never had in her entourage a woman capable of helping her realize all of her grand projects, much less a woman of general usefulness to her.  She tried very much to find one, but she never found among those near to her the collaborator she dreamed of.  Her one and true friend, A. A. Vyroubova, did not possess any sufficient experience in such matters, and she was most naive, and quite absorbed in extra-terrestrial preoccupations.  The Empress had even complained to one of her entourage of the impossiblity she was having to find an assistant who was reliable, useful and expert.

The Grand Duchesses and the maidens of honor helped the Empress with her preparations for the bazaar and they often called on the cooperation of the officers of the Standardt.  They made packets, they glued, nailed and arranged the many various objects which were going to be sold under the eye of the Empress.

The ladies of Yalta were effervescent. Many of them were going to take part in the bazaar. To have a counter in the same room as the Empress, to take part in the same meeting as she was in, more or less, to be a saleswoman within whatever radius, was quite esteemed as a great honor, as a flattering distinction and of unappreciable value.

In this feminine beehive, things were not going without incident. 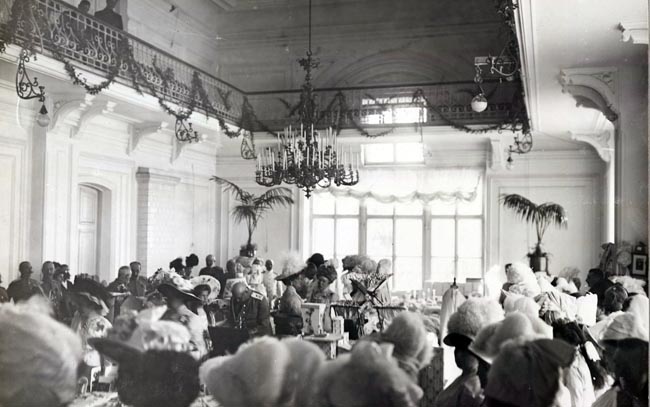 The patroness ladies, with an exaggerated rigor, would not admit as a saleswoman a certain young lady of a temperment perhaps too gay, and who had many worshippers. Now, as this woman was of a most honorable family, this refusal caused something of a scandal.  It was then addressed to the Empress.  She was in horror at hypocrisy and she knowing what steps to take against the sham virtuous people of our world sent out an Imperial warning and the kind little lady was authorized to take part in the bazaar.

The bazaar opened September 25 in the new boy's gymnasium building.  In the large hall was an immense semi-circular table; this was Her Majesty's counter.  Behind the table was the Empress, all the Grand Duchesses and the daughter of Grand Duke George Michailovitch.  They were assisted by the maidens of honor, the suite and the officers. A myriad of magnificent objets had been put out.  Many of the things had been created by the Empress herself; cushions, sachets, lampshades, boxes, frames.  On many of them were the portraits of members of the Imperial Family, and above all that of the Tsarevitch, who also made his appearance from time to time behind the table.

Quite near to this table was that of Grand Duchess Militza Nicholaiovna, the wife of Marshall of the Nobility Popov, Princess M.V. Baryatinkskaya, Mme. Dyedyuline, the wives of the officers of the Navy of Sebastapol, with Mme. Bostrom at its head.

They had prepared a great lottery.  Princess Troubetskaya, wife of the commandant of the Imperial Escort, friendly and pretty, offered tickets.  Display tables bent under the weight of the lots.  The walls were covered with rugs, and paintings by masters.  Many objects had been brought by Grand Duke Nicholas Michailovitch, with others having been offered by the merchants of Yalta.  Beautiful art vases, from the Imperial Porcelain Manufacture, formed the principal lot and were the main attraction of the lottery.

The Grand Duchesses never stopped going to the lottery, curious to know who were the winners of which lot and the objects which were won by who. Here the ambiance was very simple, very happy, dominated by a sort of chance.  Having bought four tickets for a ruble, I won a magnificent rug. Princess Troubetskaya asked my permission to hold on to it until the end of the bazaar.  It made for a beautiful advertisement. 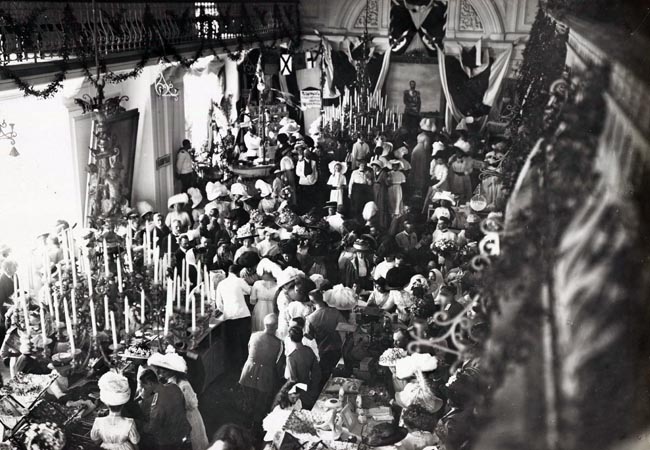 The order was given to admit everyone to the bazaar.  Waves of people from all stations did not cease to flow in: the elegant world, dressed in the latest fashions, to the simple women poorly dressed. Each and every one wanted to see the Emperor, the Empress, their children, and to stay for a few moments near them, and to receive from their hand some trinket, to buy an object made by them.

It was thus that they were all around the great center table. Although the Empress was ill, she made efforts to overcome her illness and to be friendly, even charming.  The Grand Duchesses tended to the objects happily.  They signed their names to post cards, which was quite a success.  The public was rapt.  Many peasants could not hold back their tears.  The Emperor watched the passers-by, saluted, and wore a friendly and enthusiastic smile.

Despite the apparent simplicity, the bazaar proved to be of no small confusion to my detachment.  It lasted three days. The receipts had been fabulous. The money was put under the personal control of the Empress.

The bazaar served to inaugurate the season of the worldly life of Their Majesties.  It was followed by a series of children's balls organized by the intentions of the Grand Duchesses.

Published originally only in Russian and French, it has been a neglected source until recently.  The previous account of the Empress's Charity Bazaar in Yalta, from 1911, is my own translation from the French undertaken in 2004.

All accompanying photographs are with the kind permission of the Beinike Rare Book and Manuscript Library, Yale University