from Hessian Tapestry by David Duff 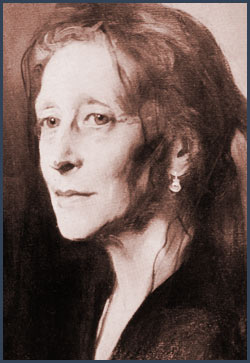 In 1913 the tricentenary of the reign of the Romanoff dynasty had been celebrated in Russia and Nicky and Alix visited the home towns of the family. Jaroslaw and Kostroma on the Volga. One of the river inspector's ships had been fitted out as a yacht for them. It had not been returned to its usual service, and Nicky had suggested that it might be used for us for our trip. We embarked at Nijni Novogorod (renamed Gorky) and after visiting that town, then in its somnolent period before the great autumn fair, we steamed down the Volga to Kazan. We spent a couple of days there, Ella attending church services and we doing sight seeing and all lunching at the Governor's House in the Kremlin. All the old fortified centres of Russian cities went by that name. It was interesting to see the Tartar population still in their distinctive Oriental clothes. There seemed to be a lot of eye disease amongst them, for there were many blind or half-blind people walking about.

From Kazan we steamed up the Kama, which falls into the Volga a little lower than that town, and went as far as Perm. The immense breadth of the Volga was most imposing, but the shores were not very picturesque and owing to the great width of the river, often far off, while the banks of the Kama offered much variety. There were little towns with their churches showing among the woods and meadows topping the banks.

We landed at various spots, where Ella had to visit convents. At one place I remember a large wood of lime trees in full bloom and the scent was delicious. The population of the villages all turned out in their best clothing to receive Ella. There we saw a man of the Tcheremiss tribe, strikingly different from the Russians.

We often ate small sterlet, freshly caught, which I consider much better than the great fat sterlet people make such a fuss about. The ship, though not luxurious, was very comfortably furnished and a good big bathroom had been built in it. Our river voyage ended at Perm, where Ella and we separated, she going to visit various convents, one of which was at Alpaievsk, the place in which she was interned in the schoolhouse during the revolution and from where she was taken out to be murdered.

Meanwhile Louise and I made a tour in the Urals by special train. One of the first places we visited was the town of Kishtym, where no member of the Imperial family had been since Alexander I. Though not the rose, I was near enough to it, being the Empress' sister, and we were officially received there during two or three days. At all the other places we stopped we were very hospitably welcomed too, both officially and privately, and were presented with gifts and souvenirs. At Kishtym there was an exhibition of Home Industries and we were given complete peasant costumes.

There we visited an interesting cave on the banks of the small river which had only been discovered a year or two before. The weather being exceedingly hot and the cave being very cold, elaborate preparations were made for us to put on thick stockings, overcoats and wraps in a tent specially erected for this. We were not allowed to stay very long in the cave for fear of getting inflammation of the lungs from the extreme and sudden changes of temperature. We had to crawl through the entrance, sheepskins having been laid down on the ground in the passage on the rocky soil. The limestone ridge was not high, nor was the cave very deep, faint daylight penetrating into it, yet the temperature was permanently below freezing point. In one corner there was a great mass of smooth ice of a lovely blue colour and the roof of the cave was encrusted with large and perfect ice-crystals of fascinating shape, for the air was absolutely still. They were brittle that our walking about would cause them to fall down. When we left the cave, we felt exactly as if we were entering an oven. The official and opulent banquet that evening was a very trying performance!

From Kishtym the train took us into the Ural Mountains, where we visited various mines. The furthest point we went to was a little beyond the sign post on the old road, one arm of which was marked "Europe" and the other "Asia". The scenery of the Urals reminds one of Scotland. There are no great mountain peaks and the hills are often covered to their summits with firs, while rivers and lakes can be seen in the valleys.

The biggest town we visited was Ekaterinburg. I did not think the town attractive and the population did not seem particularly pleased at the official visit. I noticed it especially at an evening entertainment of fireworks, where the crowd was quite unenthusiastic. We also attended a sort of afternoon party on the banks of a lake, driving through the woods and forests not far from the spot where the remains of the destroyed bodies of Nicky, Alix and their children were found.

The Ipatiev House at Ekaterinburg, where Nicky, my sister and family were interned, lies on a big square, and I have several times driven past it and remember that it was pointed out to me as belonging to a rich merchant.

Meanwhile the political outlook was so threatening that any hopes of Louis and Dickie being able to join us on this holiday were given up, and Alix warned Ella that we had better return to St. Petersburg as soon as possible as war might break out any day. We went straight back to Perm, and our journey from there to St. Petersburg was a slow one as mobilisation was in full swing and our train had several times to be shunted off the line to make way for the troop trains to pass. war between Russia and Germany was declared while we were under way.

We reached St. Petersburg on the evening of August 4th, on the very day England also declared war. Sir George Buchanan and Isa Buxhoeveden, one of Alix's ladies-in-waiting, received us at the station and the latter took us to the Winter Palace. Alix, with the two oldest girls, came to see us next morning, and I spent the next day with her and her family at Peterhof. She came again to see us before we left and, with loving forethought, equipped us with thick coats and other serviceable clothing for the sea journey, we only having the lightest of summer clothing with us.

We had to provide ourselves with a large sum of money in golden sovereigns, which was rendered possible through special Imperial permission. I believe it was 200 pounds, which we divided up, each one of the party having a share of the money in small bags worn round our waists under our dresses. We left St. Petersburg on the afternoon of August 7th. I little dreamed that it was the last time I should ever see my sisters.

We were taken by special train to the Russian frontier at Torneo, at the head of the Gulf of Bothnia. Lying at a wayside station, I caught sight of another saloon carriage on the line opposite ot us, in which I recognised Aunt Minnie (Dowager Empress of Russia), her daughter Olga and party at tea. We dashed across to speak to her and get the latest news. Aunt Minnie had come from England and Olga from France, and they had been sent out through Berlin and Sweden and were now nearing home.

We boarded the last steamer leaving Bergen. They had managed to secure cabins for us from Oslo. The ship was crowded with the last tourists and anglers coming from distant parts of Norway, and people slept on the floor of the dining saloon. We crossed the North Sea going as high up as Petershead and coasting down from there to Newcastle. We had good weather and an undisturbed voyage, but we found all the warm clothes Alix had provided us with the most useful in the fresh sea air.

We arrived in London no the 17th of August, ten days after we left St. Petersburg. We found Louis absorbed in his work, which went on at night as well as by day. As to Dickie, whose leave from college had begun several days before, he had been quite solitary at the Mall House till we arrived, and tried to find occupation in the care of some white mice he had bought for that purpose.

Reminiscences, by Victoria, Princess of Hesse and the Rhine, Princess Louis of Battenberg, Marchioness of Milford-Haven