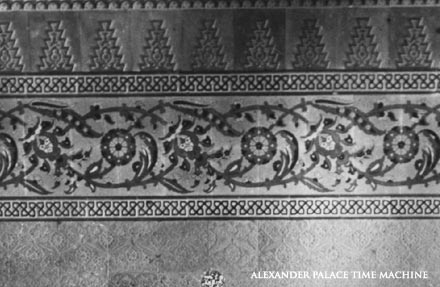 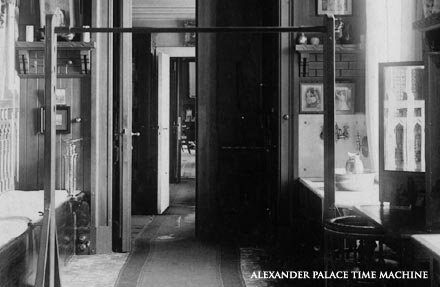 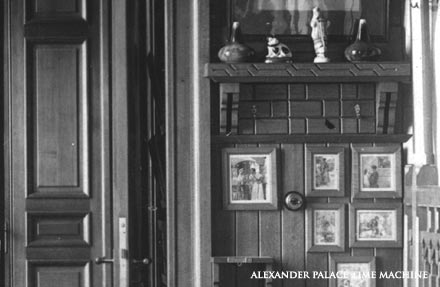 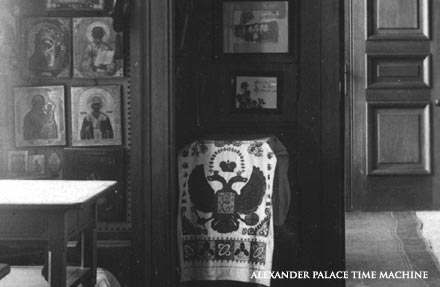 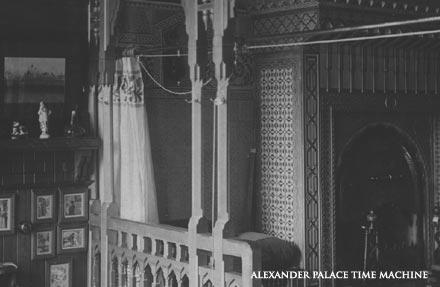 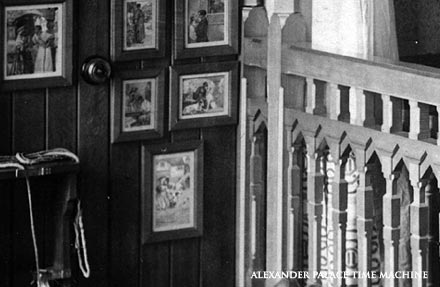 The Tsar's Bathroom had a giant heated swimming tub on a platform which also led, via a glass and wood door, to his toilet, which was a dark room hung with an assortament of pictures including a humorous cartoon of Nicholas driving a car.

The bathroom was designed in the Moorish style by Meltzer. The millwork of the room was intricately fabricated in fragrant woods. The ceiling was particularly complex. Meltzer added many interesting touches to the room including hanging glass lanterns in the shape of old mosque oil lamps. For practical reasons they were wired for electricity. He also installed magnificent antique Turkish tiles around the top of the bath. In the arcade of the tub-platform he designed elaborate patterns in Arab style.

It was great fun for the Tsar's children, when they received permission from their father, to use his bath. A thick cord prevented falling into the bath by accident. The swimming bath was huge, it held 500 pails of water and had its' own powerful special hydraulics to rapidly pump hot water from the basement boiler up into the tub. Nicholas ordered the bath to be constructed in the palace in 1896 after seeing a similar bath on one of his estates. He used it almost everyday. A special servant was assigned to maintain the equipment below and a second servant was assigned to keep the bath spotless after every use.

Outside the tub platform, Nicholas installed the chinning bar, seen in the photograph, in 1916. The Tsar was passionate about exercise and also had a similar chinning bar in his train. He also had weights in his bathroom for working out. The Tsar was somewhat self concious about his small size and worked hard to build himself up. As Anna Vyrubova relates in her later memoirs:

"...To tell the truth, the Tsar was rather weak and lean. When he was sitting it seemed he was well-built but in fact he was not even of medium height because of his short legs. Nevertheless, he managed to harden his organism by sports and physical exercise in fresh air and develop physical strength....

Nicholas II was Alexander's III elder son. Alexander III loved his son (who in his turn adored his father) whose physical development left much to be desired. Alexander III himself was almost a giant - he could tear a pack of cards into two halves, crush a piece of silver as if it were a rusk, straighten a horse-shoe, tie a poker in a knot, etc."

On the back wall, by the left hand side of the door to the Working Study, was a collection of ikons and hanging Easter eggs. To the right was draped an embroidered cloth with a double eagle, probably the work of Alexandra or one of the girls.

Nicholas kept a large collection of Fabergé cigarette cases on the table in front of the window. He put up a display of gifts and small objects from his children in the bathroom. These included porcelain penguins and dancing girls. A floral watercolor painted by his daughter, Marie, and dated May 1917, hung on the door from the bathroom to the Working Study.

The Tsar had a parrot which he kept in his bathroom. The parrot's name was Popov and Nicholas had inherited Popov from his father.

Above: A view of the tub-platform showing the fireplace.