The Portrait Hall of the Alexander Palace in Tsarskoe Selo 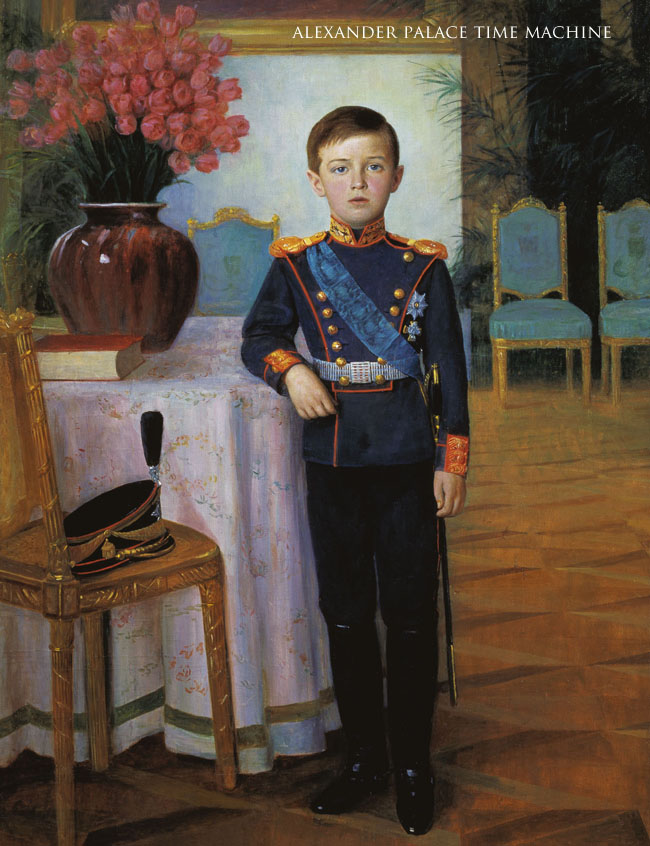 Above:  Portrait of the Tsarevich Aleksey in the Portrait Hall of the Alexander Palace.

The Portrait Hall was one segment of the great three-part hall which made up the central core of the palace. One one side a door led from the Portrait Hall into the Mountain Hall. On the opposite side it opened through a great arch and arcade of columns into the Semi-circular hall. The columns were made of artificial painted golden Sienna marble with Ionic capitals. The walls were covered in white scagiola - an artifical marble surface made of ground pure white alabaster. The soaring vaults of the room were painted a simple and pristine white white set off the massive chandelier from the time of Catherine the Great which hung from the center. Huge windwos opening onto the park let in massive shafts of light. The floors were set with plain parquet in a diamond pattern, which was kept so highly polished it was a hazard to anyone walking on it. Servants had to wear shoes with special soles to prevent slipping and falling on the slick parquet. Numerous carpets from France, Russia and the Near East were strewn across the floor. 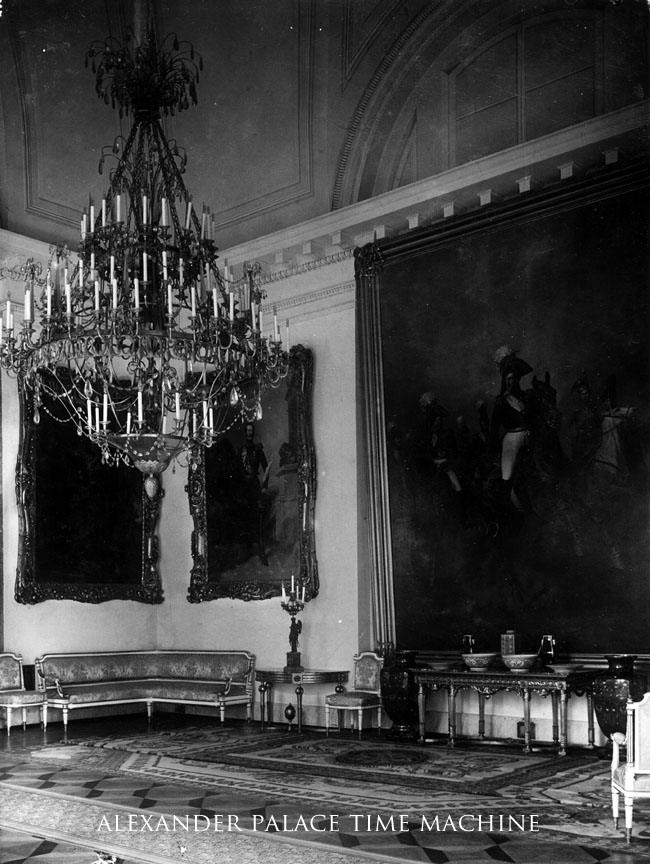 Above: A mammoth painting of Nicholas I on horseback dominates this wall of the Portrait Hall.

The Portrait Hall was named for the collection of paintings of members of the Romanov family which where displayed here. On its walls were life-sized paintings of Alexander I, a giant life-sized Nicholas I on horseback, his children and Catherine the Great. Because available wall space had run out by 1900 no paintings of the last Tsar or his family could be hung here.

The sumptuous furniture in the Portrait Hall was mostly French dating from the late 1700's, including a number of gilded pieces covered in blue silk by the famous French furniture maker, Jacob, which were brought to the Alexander Palace from the Arabesque Hall of the Catherine Palace in 1902 - these are now back in the restored Arabesque Hall. This set of furniture was one of the great treasures of the palace and was greatly admired by visitors. Alexandra made many changes to the arrangement of this room in 1902 and 1903, bringing pieces of furniture from the Chinese Theater and the Catherine Palace to make the room brighter and more beautiful. 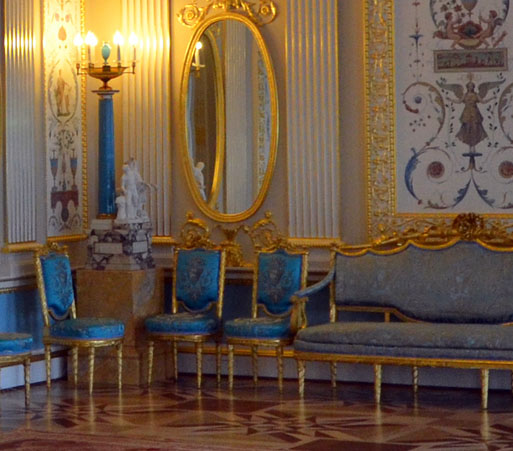 Above: The restored Arabesque Hall in the Catherine Palace.  The sofa is original while the chairs are reproductions.  This sofa and other pieces from this set were in the Portrait Hall of the Alexander Palace from 1902 -1941.  The blue and silver lampas silk on this set is particularly beautiful. The large standing torchiere in the corner is one of a pair that was originally in the Marble Hall of the Alexander Palace. 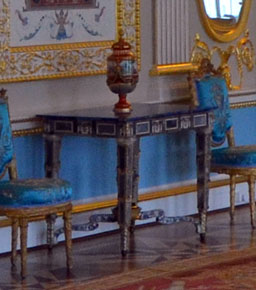 Furniture was moved from palace to palace as the need arose. For large dinners additional chairs, tables, and dishes were carefully packed and carried down to the Alexander Palace from the big, nearby Catherine Palace.

Left: This petra dura lapis table is from the Portrait Hall of the Alexander Palace.  It is now in the restored Arabesque Hall of the Catherine Palace.

The Arabesque Hall was one of Catherine the Great's favorite rooms.

The new restoration is an amazing example of what incredible work the people working in the Tsarskoe Selo museums are doing today.  I think there has been a huge improvement in the quality of restoration since Soviet times.

Partially, in my humble opinion, it's a result of the money being allocated to the restoration, but even more so it simply reflects the sophistication and high cultural level of work being done by the current directorate. 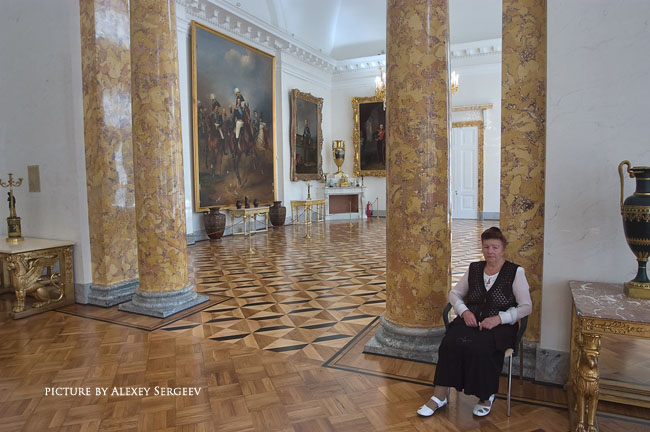 Above: a 2010 view of the Portrait Hall taken by Alexey Sergeev. 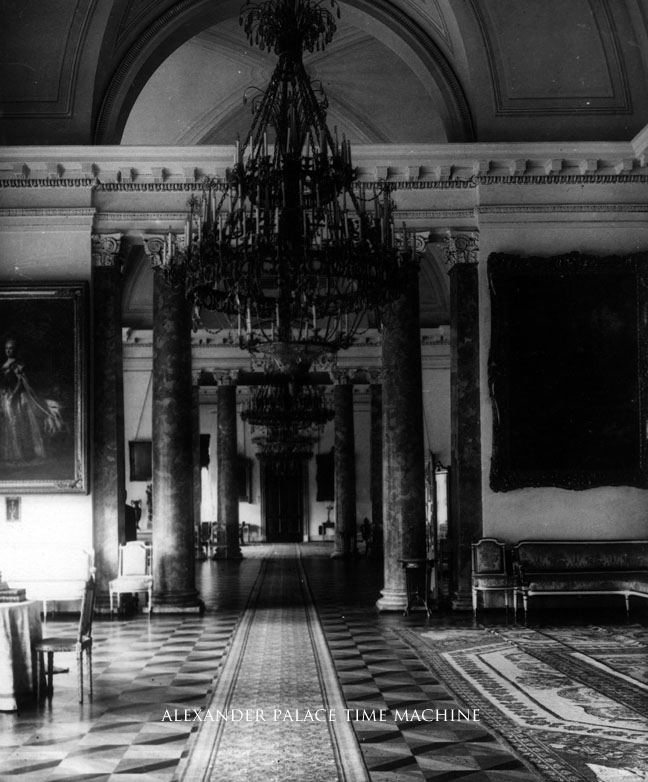 Above: A view  from the Portrait Hall into the Semi-circular hall and from there into the Billiard Hall. 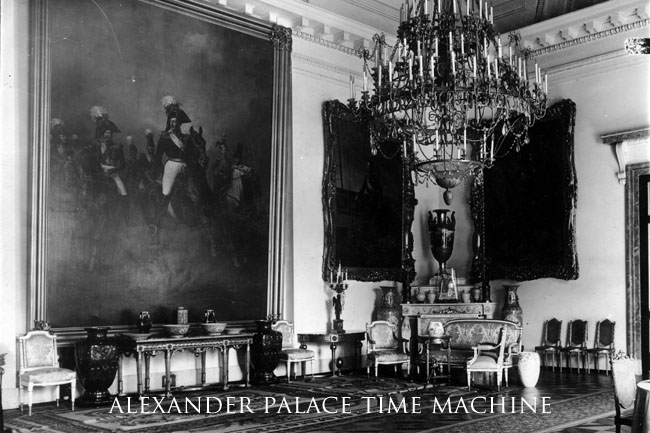 Above:  Here's another view of the huge painting of Nicholas I, his generals and sons by Kruger.

Dust covers were placed over all the furniture when the Romanovs were away from the palace for extended periods. Each was tagged with the room and piece of furniture it was sewn for. They were strong, durable and hand-made - lasting for decades. The 1910 set was used in the museum right up until until 1941 when the palace was captured and occcupied by the Germn army. 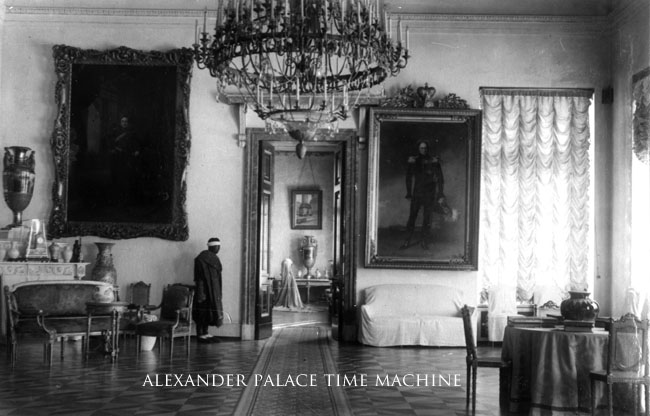 Above: In the far right corner, between the windows, is a small ikon of Christ. All rooms in the palace had an ikon of The Savior in this position.

This photograph dates from the time when the Palace was a museum. The figure to the left of the door is a mannequin dressed in the 'Arab' livery of a palace servant. Through the door one can see the interior of the Mountain Hall. Underneath the painting of Alexander I by Dau can be seen a sofa covered by a dust cloth. The painting now hangs in the Catherine Palace. The original frame was left behind during the German occupation of the Alexander Palace and has vanished. 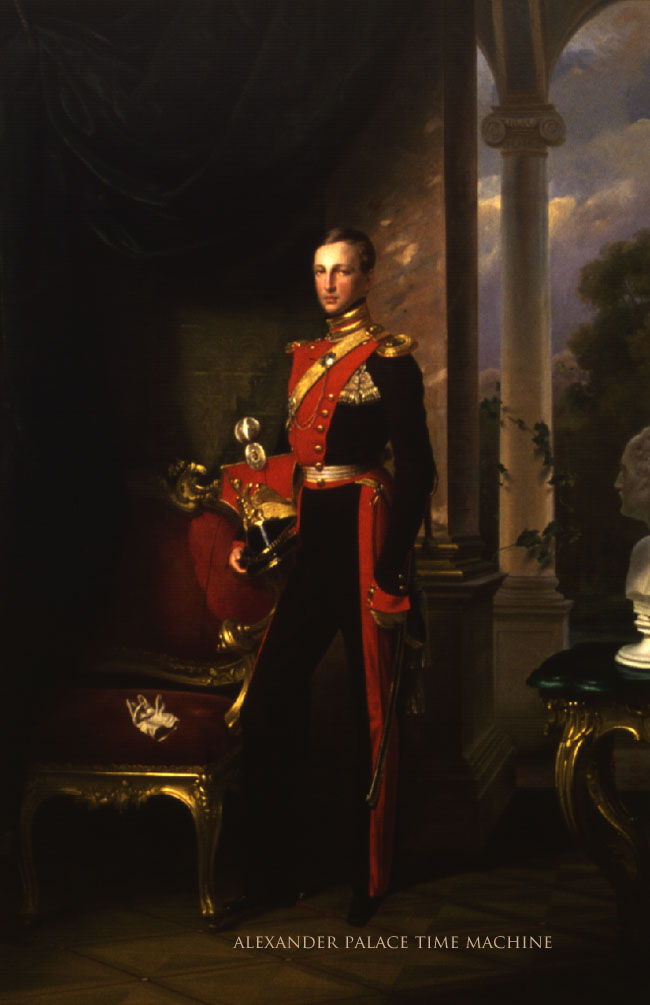 Above: This is the painting standing on the left side of the door in the picture above it.  It's Alexander II as a young man.  The last time I saw it the painting was in the storage halls of the Catherine Palace. 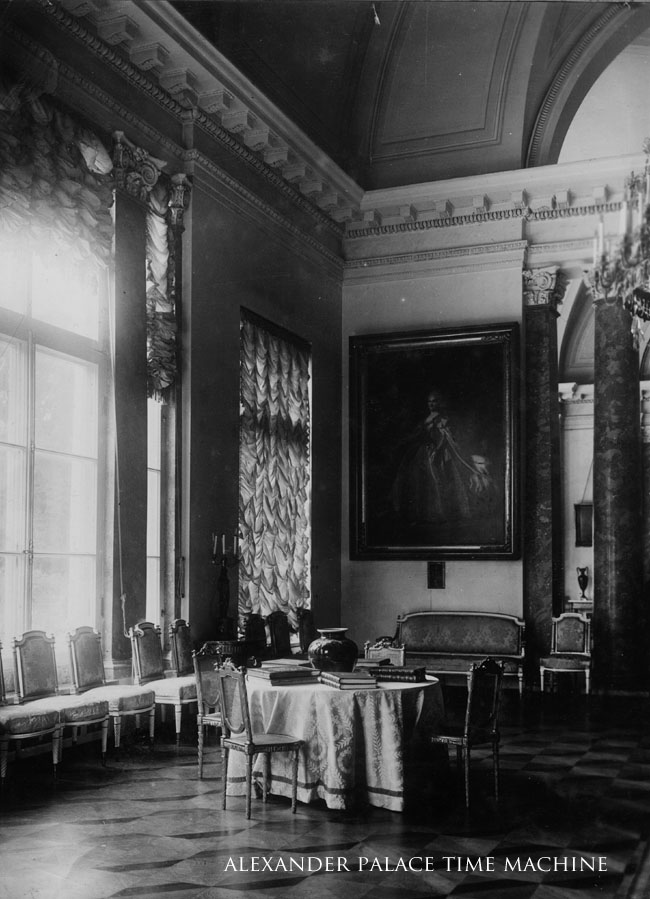 Above: A huge portrait of Catherine the Great which was given to her grandson, Alexander I, when she presented him with the Alexander Palace as a wedding gift in June 1796.  This was just a few months before Catherine's death in November of the same year.

The Portrait Hall was used frequently for entertaining and the traditional Russian "Zakuska" course - hors d'oeuvres as a prelude to dinner - was often served in this room to standing guests with drinks served by liveried servants. The main dinner itself would be served in the adjoining Semi-circular Hall. The Russian Zakuska is an elaborate and large hors d'oeuvres buffet of cold meats and poultry, smoked fish, cheeses, pates, breads, dozens of salads, and of course, lavish amounts of caviar. Typically, it would have been acommpanied by large quanitites of ice cold vodka, or French Champagne.

An image above shows a view into the Semi-circular Hall and shows the three giant chandeliers and the beautiful central space of the Palace. The chandeliers are from the reign of Catherine and are the originals probably designed by Quarenghi. They had a third lower tier added sometime in the late 19th century and were electrified in 1895. On the far left is part of a large painting of Catherine the Great. Beneath it is one of a pair of magnificent lapis, carnelian and jasper tables which Alexandra had brought to the palace in 1902. Unfortunately neither of these can be seen well in this photograph.  These tables are now in the recently restored Arabesque Hall of the Catherine Palace.

Because of the bright light in this room and its impressive furnishings, the Portrait Hall was often used for formal photographs of the last Tsar and his family. None of the photographs shown here include the big palm trees from the Imperial Greenhouses which would have decorated the room prior to 1917.