Plans, Maps and Churches - Ikon of Our Lady of Tsarskoe Selo 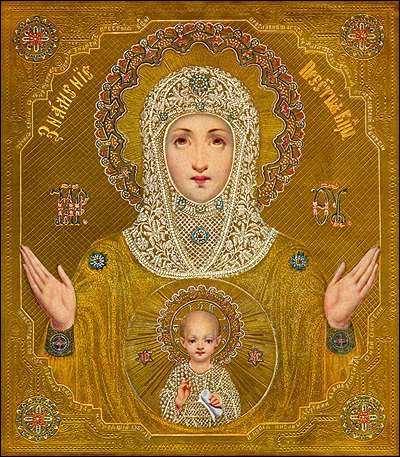 The image of our Lady of Tsarskoe Selo was the favorite ikon of the Empress Alexandra and her daughters. This copy above was reproduced in a deluxe book issued to commemerate the consecration of the Imperial Fyodorovskii Cathedral in 1912. The ikon is a variation on the ikon of the Virgin of the Sign, which shows the infant Christ in the bosum of the Virgin as a symbol of the Incarnation of Christ. The original ikon of Our Lady of the Sign was very old - dating back to late Roman times in the early days of the Christian church. For more information on the history of ikons go here. The icon of our Lady of the Sign was expecially venerated in Tsarskoe Selo and the earliest church of the city was dedicated to this ikon. Alexandra and her daughters went to this church frequently. The ikon from the church was sometimes brought to the Alexander Palace. The most famous occurance was on the day before the Imperial family was exiled to Tolbolsk on August 1, 1917, when the icon was brought and processed through the palace on Aleksey's birthday.

The ikon of our Lady of Tsarskoe Selo is a sentimental painting of the Virgin with Christ which deviates from Russian and Orthodox tradition by showing the faces of the Virgin and Christ in a hyper-realistic style. This copy was a stamped and gilded illustration. It depicts the ikon with a silver-gilt cover decorated with enamel work. The head of the Virgin and garments of Christ are embelished with seed pearls. On the head of the Virgin and on both of her shoulders are three stars. This is symbolic of Mary having been a virgin, 'before, during and after' the birth of Christ. 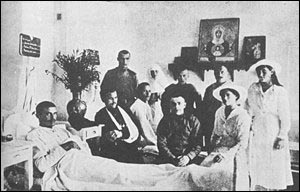 Alexandra carried a favorite copy of this ikon with her always and it was found in Yekaterinburg after the murder with the precious stones which adorned the silver gilt cover torn out. The Empress's valet identified it as her ikon. I don't know where it is today. A copy of our Lady of Tsarskoe Selo was to be found in all of the Empress's rooms and also in the rooms of the Grand Duchesses. Other copies of this ikon where hung in the rooms of Maria and Anastasia's hospital in the Fyodorovskii Village (above, left), which is next to the Alexander Palace, during the war. The Grand Duchesses gave out copies of this ikon to their friends as gifts. Copies of the ikon were also found amoung their personal effects in Yekaterinburg.

A special thank you to Eugene and Irina Soldatenkov of St. Petersburg for a scan of this image.