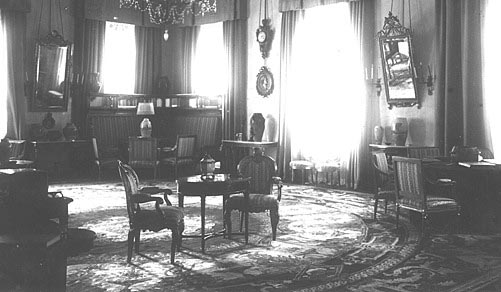 Alexandra's Formal Reception Room was one of the sunniest rooms in the palace and the largest of the personal rooms of the Imperial family. It connected to one of the palace libraries and was situated in the far right corner of the palace. Seven big windows looked out from the Reception Room onto the Alexander Park. The walls were covered with white artificial marble and topped by a beautifully molded entablature whose crispness and clean classical design is the mark of the work of the architect Quarenghi. This room preserved the austere late 18th century style which Catherine the Great had intended for her grandson's palace. It is possible that some of the furnishings of this room were a part of its original decoration. 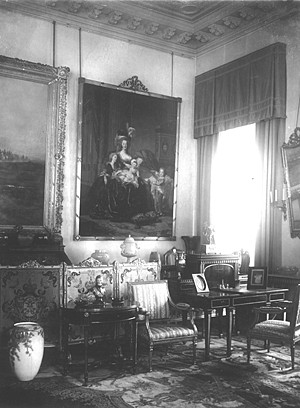 Left: The substituted desk and Vigee-Lebrun tapestry. On the table to the left of the desk stands a Wedgewood bust of Alexander I.

The snowy whiteness of the room was set off by heavy, cranberry-colored curtains on the windows, which had inner drapery made of thin lace. The floor was made of a dark gold parquet. In the center of the room hung a beautiful crystal chandelier with a ruby-red glass center in the Russian manner. Rudy-red blown glass is very difficult to make - the red color is obtained by adding gold to the molten glass before it is blown into its delicate shapes by the glassmaker. This chandelier dates from the epoch of Catherine the Great and was most probably original to the room.

The furniture included some of the finest in the palace, including a roll top desk, which contained a musical mechanism, by famed German cabinetmaker, David Roentgen. It dated from the time the palace was built ands may have been part of Catherine's wedding gift to Alexander and Elizabeth. This piece was Alexandra's formal writing desk and it was considered one of the most valuable works of art in the palace. After the revolution it was evacuated to Moscow. When it returned to Petersburg it was sent to Hermitage, where it stands today. In its' place museum workers substituted another desk by Roentgen, one of a matching pair which were found in the palace. These may have been the working desks of Alexander and his young wife Elizabeth. Above: Portrait of Alexandra by Makovsky after an original by Kaulbach that was hung in the Formal Reception Room.

There were also many pieces of 18th century French furniture and an enormous Savonierre carpet on the floor. After the French revolution the French Government sold off furniture from the former Royal palaces. Catherine's representatives attended these auctions and made many purchases. Since these auctions took place at the time the palace was being built it is possible that some of these royal furishings made it to the Alexander Palace. Two ivory screens, covered in tapestry, appear to be from the reign of Louis XV and bear the French Royal monogram.

In 1896 Meltzer had made some additional pieces of furniture - including a incongruous cozy-corner, in 18th century style, and then covered all the chairs in the same, apple-green Louis XV material. This tied the disparate designs of the furniture together into a suite.

The decorative items in the room were a mixture of late 18th, 19th and early 20th century items. There were a number of small sculptures, including bronze busts of Alexander I, his wife Elizabeth, and Paul I. There was also a colored Wedgewood bust by Enoch Wood of Alexander I produced in England in 1814. On the wall hung a splendid marble carving by Marie-Anne Collot of Catherine the Great from 1774 - it was sold by the Soviet Government in 1933.

On the hour the reception room chimed with the striking of bells from a number of 18th century clocks which stood in different parts of the room. 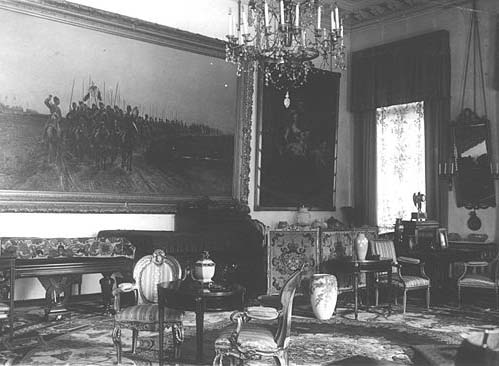 Above: Detaille's "Cossacks" and Vigee-Lebrun's "Marie Antoinette and her Children". A grand piano and an organ stand against the wall beneath the paintings.

There were a number of large paintings on the walls. The most prominent was a huge painting of "The Cossacks of the Imperial Guard". It was painted by the French military painter Edouard Detaille, in 1889 for Alexander III. Detaille also worked for Nicholas II - who had several Detaille watercolors in his rooms. This giant canvas was commissioned at a cost of $50,000 - which would be close to a million dollars today. 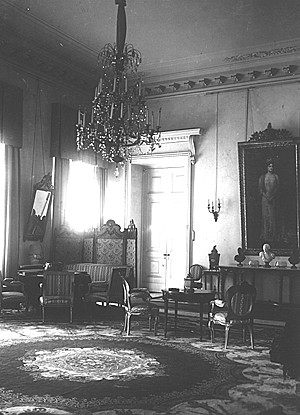 Right: The painting of Alexandra by Kaulbach hangs between the two doors. This was a spot where famous photographs of the Grand Duchesses were taken in 1913 for the Tercentenary of the Romanov Dynasty.

Between the two doors of which lead into the Formal Reception Room hung a large portrait of Alexandra in a heavy gilt frame which was painted in 1903 by the German artist, Kaulbach, who was one of Alexandra's favorite painters. It was a moody painting showing the Empress in a dark forest wearing a shimmering mauve gown and wearing a diamond tiara. After the artists did studies for the Empress's face he requested that the dress be sent to Munich, where it was mounted on a figure the same size as the Empress - thus the artist completed the picture. After the portarit was completed and shipped off to the Russian capital Kaulbach humbly asked the Empress for the dress as a memento and she granted his request. The Kaulbach family still preserves this dress. Kaulbach's study for this painting was Nicholas's favorite portrait of his wife and he placed it in his New Study.

One of the most famous items in the Formal reception room was a Gobeliens tapestry of Marie Antoinette - a copy after Madame Vigee-Lebrun made in 1887. This tapestry was a gift of the French President Lebrun to Alexandra, who was a collector of Marie Antoinette's personal things. The Empress was quite interested in the tragic Queen of France and read a lot about her. When she and Nicholas visited France prior to his coronation Alexandra had been invited by the French president to stay in Marie-Antoinette's rooms at Versailles. After the 1917 revolution this tapestry was used by museum guides as an unlucky talisman foretelling Alexandra's fate. While this may seem appropriate to us today at the time no one suspected the fate that awaited Alexandra and the gift was never thought to have been inappropriate. In 1895 Nicholas and Alexandra's future seemed bright and positive. Recently the museum authorities have had a new doorway punched through the wall where the tapestry hung.

Finally, next to the Detaille was large painting of the "Coronation of Nicholas II" by the Danish court artist, Laurets Tuxen. Copies of this painting hung at the Dowager Empress Marie's Anichkov Palace in St. Petersburg and in Buckingham Palace in London.

If one were an ambassador, minister or foreign dignitary Alexandra would probably have received you here. She also received members of the Court and aristocracy in the Formal Reception Room. The room was also used on occasion for special dinners or luncheons and could seat about 30 comfortably.