The Billiard Hall in the Alexander Palace - Spacious and Airy 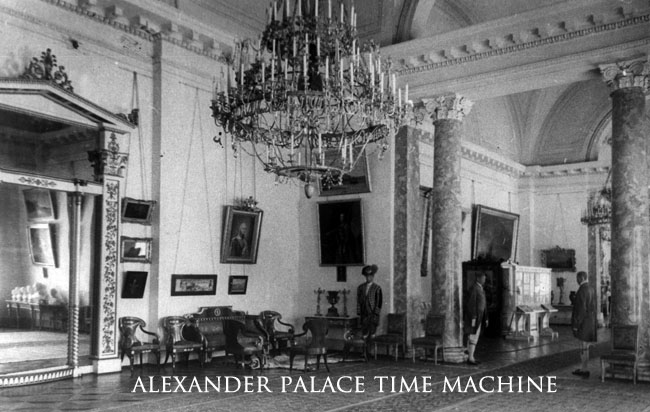 All three rooms, the Portrait, Semi Circular and Billiard/Marble Halls communicate by wide arched columned arcades. They can be experienced as one vast hall. The Billiard Hall was also called the Marble Hall. During the reign of Nicholas I billiards became a very popular pastime for men and women in noble homes. The billiard tables and horsehair-stuffed furniture in the this hall were removed during the reign of the last Tsar and the room was primarily used for large receptions in the last years of the dynasty. 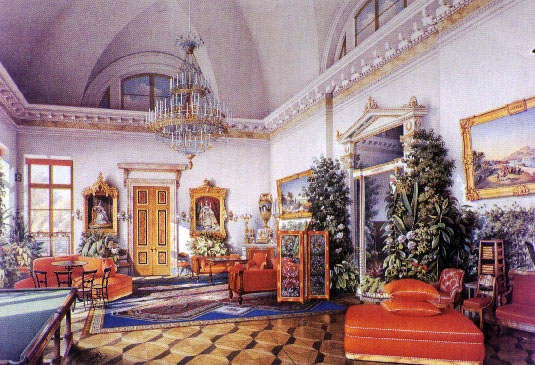 In the watercolor above, painted around 1860, we are looking away from the Semi-circular Hall toward a Karelian birch door which leads into the Palace Chapel. On either side of the door are large paintings. The one on the left, in a Gothic-style frame is of Queen Victoria by the artist Galter and was a gift from her to Nicholas I on his visit to England in 1844. The other painting is of Nicholas I's wife, Alexandra Fyodorovna by Neff. This painting was exhibited in the famous "Jewels of the Romanovs" exhibition which toured the USA in 1997. Looking carefully at this watercolor, four small oils lamps can be seen mounted on either side of the paintings. 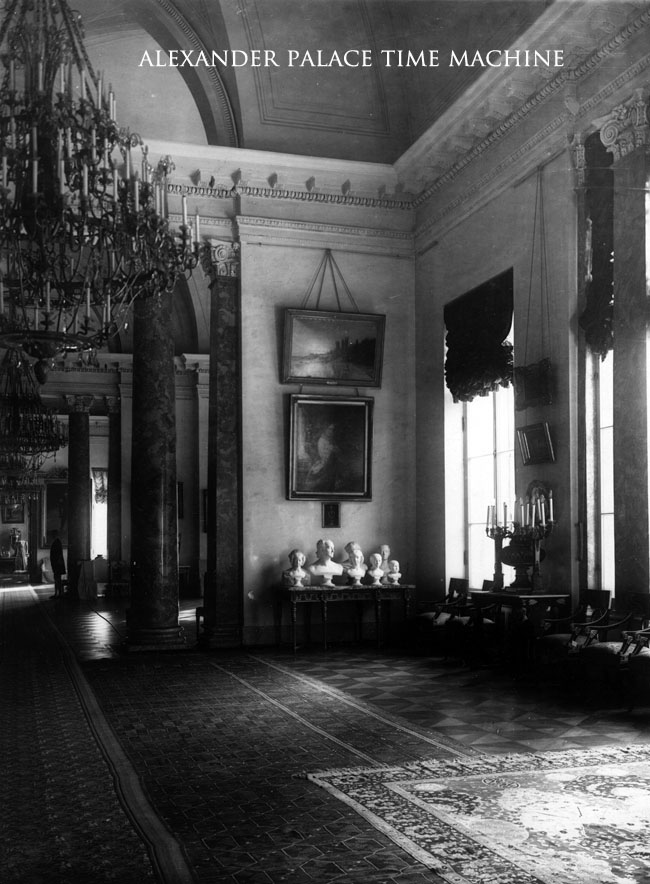 Above: A corner in the Billiard Hall of the Alexander Palace. 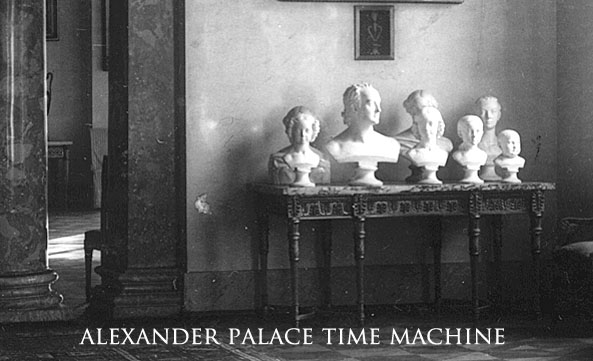 Above: Close up of busts of the family of Tsar Nicholas I by Karl Vihman

A portrait of Alexander I, by Madame Vigee Lebrun, and painted by her in the Alexander Palace during her visit to Russia, hung on the right-hand wall. He can be seen on the left in the picture at the top of this page.

As in the other rooms dating from the late 1790's, this hall has walls covered with a white polished marble finish. In the arches over the cornice the false windows have clouds painted in them. On the right a door to the White Hall has been covered with a large white and gilded pier mirror. The mirror has hidden hinges and can be opened, providing an entrance from this room into the White Hall. 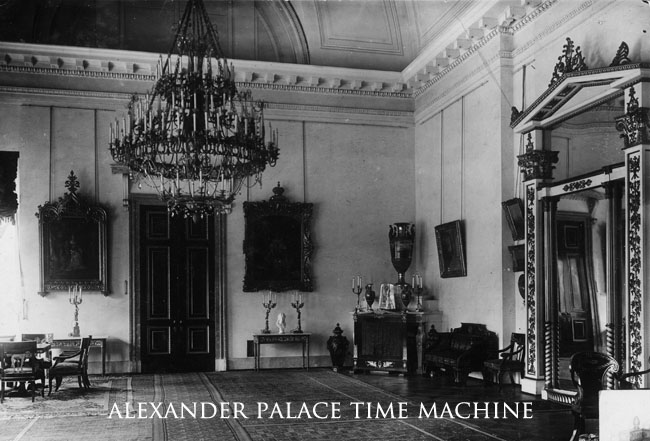 Above: Door from the Billiard Hall leading into the Alexander Palace Chapel.

After electricity was installed the oil lamps became unnecessary and where removed. The plants from either side of the pier glass are missing from this image, because it was taken after the revolution. 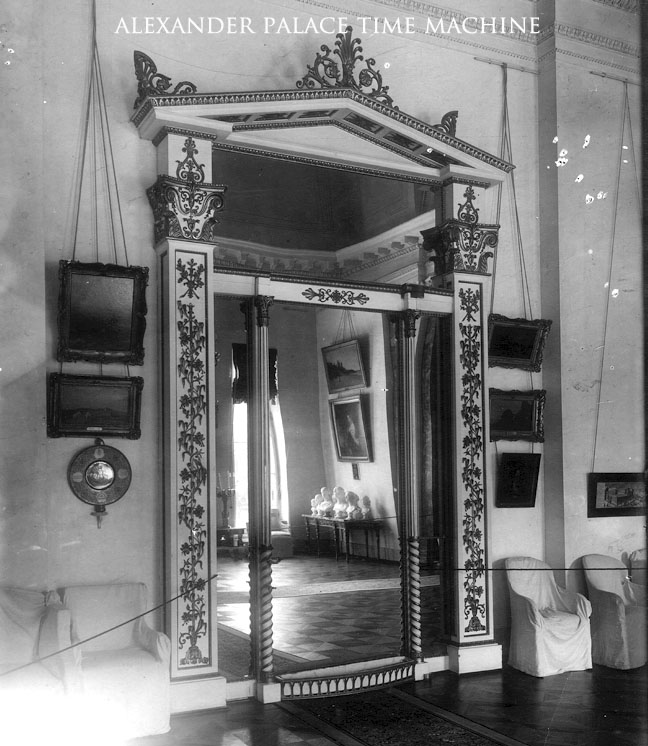 Above: Mirrored door in the Billiard Room.

After 1917 many of the plants from the Alexander Palace stopped being rotated into the palace from the nearby Imperial Greenhouses. The clouds that can be seen in the arches were later painted out. 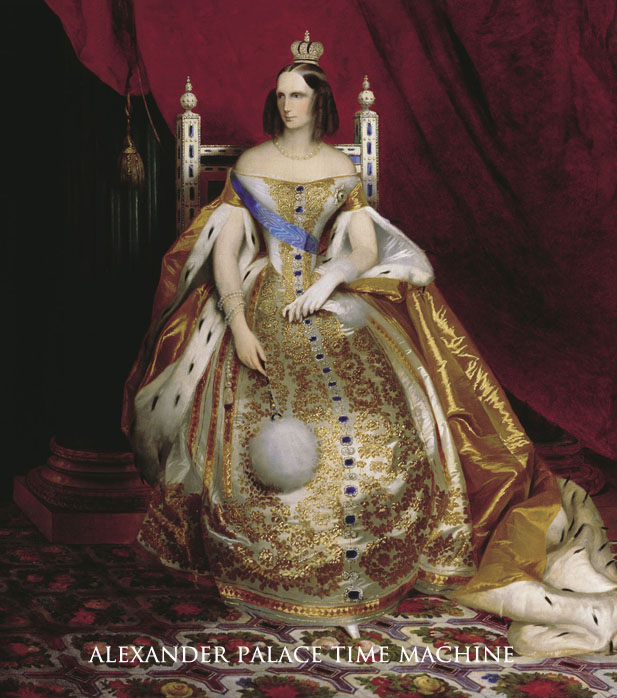 Above: Portrait of Alexandra, wife of Nicholas I.  This painting hung on the wall to the left of the door to the Palace Chapel.