Romanov Archives - Our Lady of the Sign Church in Tsarskoe Selo The yellow and white Church of Our Lady of the Sign was built in 1732 by Russian architects Mikhail Zemstsov and his assistant Ivan Blank on Palace Street, which leads from the gates of the Alexander Palace along the side of the Catherine Palace through the arch of the Lyceum. The church was refurbished in 1864 by the architect Vidov, who was doing work at the Alexander Palace at the same time. In 1892 the Italian Court Architect Danini made extensive changes to the church's design adding more space in the process. After the revolution the church was closed and turned into offices. During World War II the church was in the midst of heavy fighting. The Nazis allowed the local people to reopen the church but the building was heavily damaged by shelling. The building was not restored until 1962, when it was used again as offices. Today the church is back in the hands of the faithful and services are held here regularly. A plan of the church is at the top of this page. 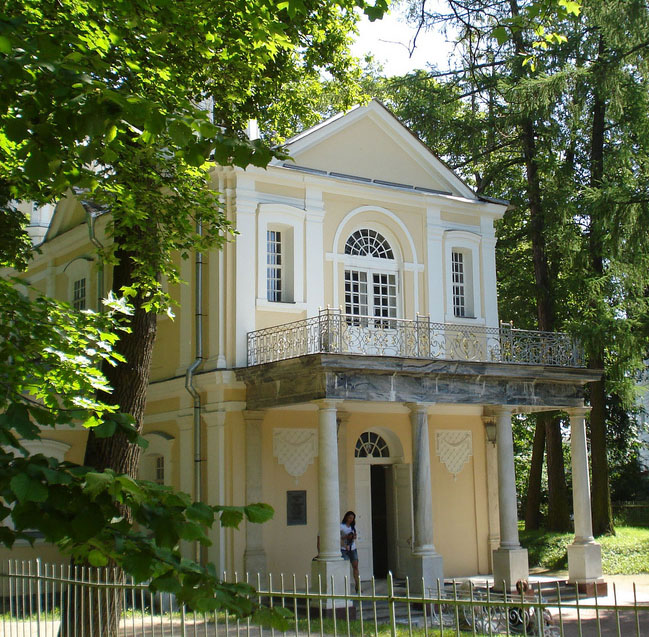 Although there were palace chapels in both the Alexander and Catherine Palaces, they were considered chapels, rather than parish churches. The Church of our Lady of the Sign is the earliest extant church in Tsarskoe Selo and was frequently used by the Romanovs. Another favorite church was Sophia Cathedral built by Charles Cameron for Catherine the Great in the hamlet of Sophia on the far side of the Imperial Park. The largest local church, until the Fyodorovskii Sobor was built, was the Catherine Cathedral in the center of Tsarskoe Selo.

Empress Elizabeth had her fatal heart attack during liturgy in the Church of Our Lady of the Sign and was layed out on the grass in front of the church while frantic courtiers ran about trying to figure out what to do. Eventually, Elizabeth was carried on a sofa to the Catherine Palace.

Until the Fyodorovskii Cathedral was built the last Tsar and his family visited this church regularly. There was a large ikon of St. Nicholas on the right side of the church which Alexandra often visited during the war to light candles and pray for the safety of her husband.

The most important ikon in the church was a large one of the Mother of God with her arms outstretched in prayer while from a aural vision of her womb the Christ child appears in blessing. The "Znaminskaya" ikon - as it was called - was the traditional protector of princes from the days of ancient Byzantium, where the Emperors solemnly paraded it on the walls of the city as a protective pallidin or carried it in battle ahead of their forces. The Znaminskaya ikon in this church was huge - about 4 feet tall and covered in silver and jewels. It was very heavy and required several strong people to carry it in processions.

Count Paul Beckendorff describes the last of these processions, which took place on the day before the Romanovs were exiled to Siberia:

"On the 30th of July, the birthday of the Tsarevich, we went to Mass, and at 2 o'clock in the afternoon a holy ikon, which was greatly venerated, was brought from the Church of Our Lady of the Sign (A feast of purely Russian origin.), which is next to the Lyceum. It was brought in procession and the clergy of this church were admitted to the Palace and to the Chapel. The Te Deum was sung and prayers were said asking God for a prosperous journey for their Majesties, their children and all those who accompanied them. The scene was moving. The ceremony was as poignant as could be: all were in tears. The soldiers themselves seemed touched, and approached the holy ikon to kiss it. They followed the procession as far as the balcony, and saw it disappear through the Park. It was as if the past were taking leave, never to come back. The memory of this ceremony will always remain in my mind, and I cannot think of it without profound emotion. In the course of the day we all went, as usual, to the kitchen-garden, and groups were taken."

Today, the ikon is in the Alexander Nevsky Lavra in St. Petersburg. It is hoped the ikon will be returned to the church, which is being restored and is open as achurch once more.

Alexandra had a variant of the ikon created called Our Lady of Tsarskoe Selo. In this variant the virgin wore a white cowl, rather than a blue or purple one. Copies of this ikon were hung in many of the personal rooms of the family and it was a popular gift from the Romanovs. Alexandra had her own, gem encrusted copy, which she always carried with her whenever she travelled. After the murder of the Imperial family the ikon was found, minus the jewels, which had been pried out.

Here's s page of wonderful images of the great mosaic icon of Christ in the upper gallery of Hagia Sophia - otherwise known as Saint Sophia.