Under Three Tsars
by Elizabeth Narishkin-Kurakin

Languages: English (translated from the German) 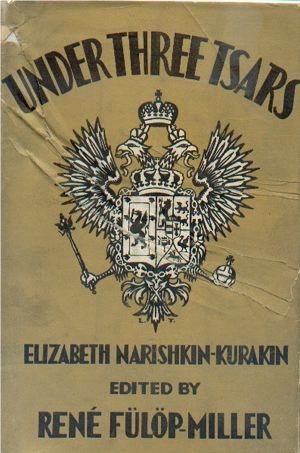 A memoir by "Madame Zizi," friend and lady-in-waiting to Alexandra Fedorovna.
50 illustrations.

While most imperial memoirs focus solely on the last tsar, Narishkin-Kurakin's account offers a broad perspective, spanning the reigns of Alexander II, Alexander III, and Nicholas II. Also, one of the less maudlin and more critical accounts.

Six Years at the Russian Court

My least favorite imperial memoir, mostly because the tone struck me as oddly detached and impersonal. Also, a number of pivotal scenes were not witnessed by Narishkin-Kurakov herself, but later described to her afterwards by the participants. For myself, I prefer more first-hand recollections and private anecdotes.