Resurrection of the Romanovs
by Greg King & Penny Wilson 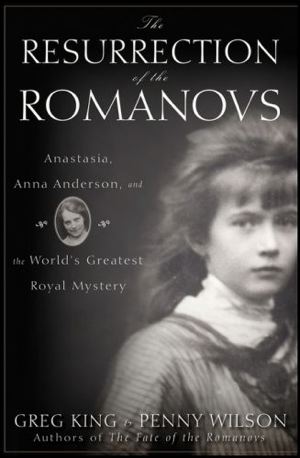 The truth of the enduring mystery of Anastasia's fate-and the life of her most convincing impostor The passage of more than ninety years and the publication of hundreds of books in dozens of languages has not extinguished an enduring interest in the mysteries surrounding the 1918 execution of the last Russian Tsar Nicholas II and his family. The Resurrection of the Romanovs draws on a wealth of new information from previously unpublished materials and unexplored sources to probe the most enduring Romanov mystery of all: the fate of the Tsar's youngest daughter, Anastasia, whose remains were not buried with those of her family, and her identification with Anna Anderson, the woman who claimed to be the missing Grand Duchess.

Refuting long-accepted evidence in the Anderson case, The Resurrection of the Romanovs finally explodes the greatest royal mystery of the twentieth-century.

A painstaking critical examination of both sides of the Anderson case.

Fate of the Romanovs

The best book to date on the subject.