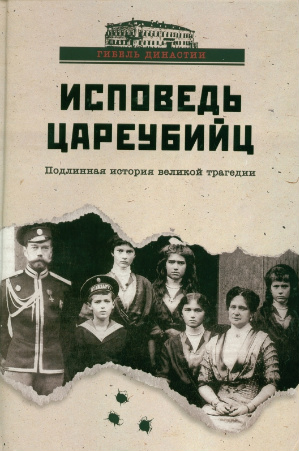 ‘The book before you –  the first in a new series  – is dedicated to the last tragic days of the Tsar’s family and the Imperial Family.  In many respects it is unique. The documents presented on its pages have been held in secret archives for a long time, and if any of them have been published then it is with significant cuts and even alterations. For the first time, the people who tookp ride in the fact that they themselves took direct part in the bloody act – the murder of the Tsar’s family – are presented to the reader in  their true colours. The authorial commentary and notes of Yu. S. Zhuk, who for a long time has been engaged in a scrupulous investigation of everything concerning the Ekaterinburg tragedy, has helped to place the final full stop on the ‘investigations into the murder of the last Russian emperor’.
[Description translated by Helen Rappaport]
(Title in Russian: Исповедь Цареубийц)

Contains much of the previously unpublished guard testimony referenced by Fate of the Romanovs-- specificallly, statements by:

This is NOT a book for anyone other than serious Romanov scholars with fluent Russian skills. Very dense, heavily annotated with a lot of tangential material.

this book profile was written by Helen Rappaport & Sarah Miller