Prelude to the Revolution: The Murder of Grigorii Rasputin
by Ronald C. Moe 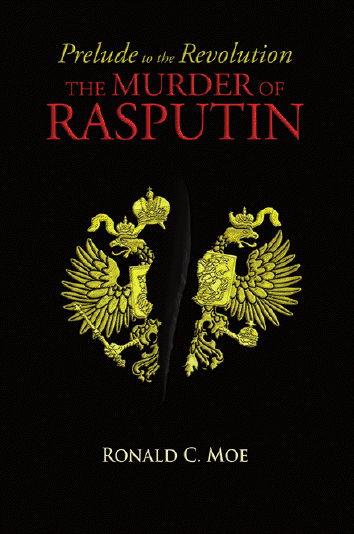 This is the story of the dissolution of the mighty empire of the Russian Tsars and of the man, Grigory Rasputin, whose murder sealed its fate. The reader will be fascinated with all the amazing elements in this saga of political dissolution; occultism, police conspiracies, high-stakes diplomacy, duels, romance, court intrigue, war, and ultimately murder and national tragedy. And it is all true and documented. This is not a novel. The murder of Rasputin and the dissolution of the Romanov monarchy were events of extraordinary significance during the early Twentieth Century with consequences continuing to the present day nearly a century later. The author, Ronald C. Moe, describes Russia under Nicholas II (1894-1917) with its fascination for mysticism, commitment to the fine arts, especially ballet, rapid industrial growth, and the political struggles and progress toward achieving a working constitutional monarchy. All this was placed at risk by Russia's involvement in World War I and especially by the presence of a staretz ("holy man") near the throne bringing it into disrepute. When all the efforts to remove Rasputin from the Imperial presence failed, the rich, handsome, Prince Felix Yusupov, married to the Tsar's niece, determined to organize a conspiracy to murder Rasputin. While the tale of Rasputin's murder has been told many times in books and movies, much of what is written and screened is the stuff of half-truths and legends. The reader will be introduced here to the true story of what happened that dark night in December 1916; who was involved in the conspiracy, the role of British agents that night, who fired the fatal shots, why the main conspirators kept the secrets of what actually happened until their deaths, and why the murder was much more important to world history than generally believed. The reader is invited to join the author in reliving one of the crucial events in world history.

A level of political and social analysis uncommon in books on Rasputin.

Murder of Grigorii Rasputin: A Conspiracy that Brought Down the Russian Empire

This is more properly an examination of Rasputin's place in Russia's social and political landscape than a biography of the man himself. Although there is little if any new information regarding Rasputin's personality and character, Moe's background in political science provides a keen and reasoned perspective on how and why a Siberian peasant was able to carve out a place for himself among those residing at the pinnacle of autocracy.