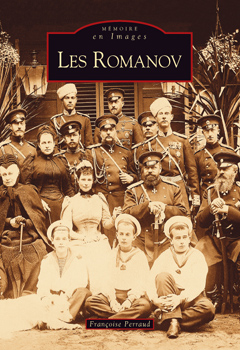 An album of postcards and photographs of the extended imperial family (approx 250 images) with an explanation under each image. Covers the end of the 19th century through the abdication of Nicholas II, including some photos of the Romanov descendants through 1953.

Romanovs Revisited: 1860-1960
Camera and The Tsars: A Romanov Family Album

While virtually all the photographs of NAOTMAA were familiar to me, the scope of this volume mirrors that of The Camera and the Tsars, with sections devoted to the Vladimirovich, Konstantinovich, Aleksandrovich, Mikhailovich, and Nikolaevich branches of the imperial family.

Overall an attractive trade paperback, likely to appeal to both speakers and non-speakers of French.