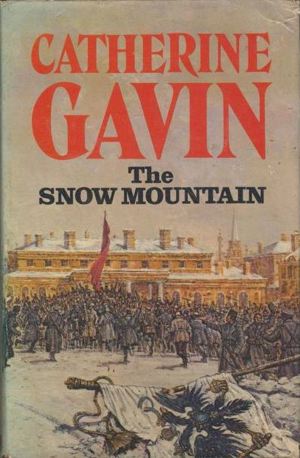 From the publisher:
Catherine Gavin's superb novel of war and revolution opens in Russia in June 1914, as Czar Nicholas and his family sail to Kronstadt in the imperial yacht to be feted by Admiral Beatty and a visiting British battle-cruiser squadron. The fascinating drama of the Romanovs, ending in a blood-spattered cellar at Ekaterinburg, is seen through the eyes of lovely Olga Nicholaievna, eldest daughter of the Czar. The novel gives a wonderful picture of court life and the imperial family as it follows Olga's love affair with a young officer of the guard and her growing awareness of the hidden dangers in the splendid empty world of the court. In scope, The Snow Mountain ranges from Petrograd to Siberia, from the Finnish countryside to the White House, presenting the familiar, compelling events of the war, the coming of revolution, Rasputin's story and death, murderous brutality in the attack on St. Petersburg, and a glimpse into the beginnings of the revolutionary regimes of Kerensky, Lenin, and Stalin.

A lovely chronicle of the last years of Imperial Russia and the five children that made the lives of Nicholas and Alexandra so happy, despite the horrors of the country. Told through Olga Nikolaevna, the eldest Grand Duchess who was extremely intelligent and enjoyed writing poetry and reading novels, it's a great resource for those interested in the children of Nicholas II and his wife Alexandra Fedorovna--the last tsar and tsaritsa of Russia.

Rob Moshein has written an excellent article on the challenges of finding Jewish ancestors and creating your own family tree.